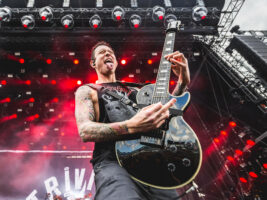 Trivium frontman Matt Heafy is a proud Epiphone player, using on the brand’s Les Pauls both onstage and in the studio. In a new interview, he touched on the origins of his signature Epiphone model and how it all stemmed from wanting to put out an affordable guitar for the masses.

Heafy was speaking on the Drinks With Johnny YouTube channel earlier this month (19 October) when he recalled his long relationship with Les Paul guitars.
“I first played Gibson when I was a kid. I was super lucky my dad got me a Gibson Les Paul Custom, I still have that one,” he recalled. “Gibson never talked to me because they weren’t interested in talking to metal bands – or young metal bands, small metal bands – for years.”
Eventually, around the time Trivium released their 2011 album In Waves, Heafy said Gibson’s German branch finally reached out to him to do a signature model, and he had his heart set on creating one most fans could afford and that he would actually use.
“I remember being a kid and looking at my favourite guitar players, ‘Oh man, it’s only 800 bucks!’ And then you pick it up, you’re like, ‘Oh, this isn’t the same one that he plays.’
“I said, ‘I want to make one that’s affordable that I get to spec everything out about it’ – it’s the same one that I use, the same when people can buy in a store,” Heafy explained. “So then I was able to make one with Epiphone – it took us about a year, it was in 2013 that we launched it, so we launched my signatures back then.”
Heafy also expressed that he’s been pleasantly surprised by how good Epiphone guitars sound these days. “The last three records have all been Epiphones 100% of the rhythm guitars, which is pretty crazy that the quality is that level now,” he said.

The post Trivium’s Matt Heafy on his Epiphone signature: “Gibson weren’t interested in talking to metal bands for years” appeared first on Guitar.com | All Things Guitar.