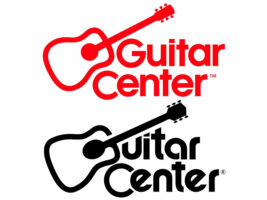 Uitar Center has finally added the letter ‘G’ to its logo

It’s a momentous occasion for Guitar Center as the American music retailer chain finally adds a ‘G’ to its logo.

READ MORE: The Big Review: The classic multi-mode delay machine gets more than just a refresh

Twitter users have long poked fun at Guitar Center’s former logo, which uses an angled acoustic guitar graphic to represent the letter ‘G’.
“I just feel like we’re being really generous letting guitar center pass this thing off as a G,” opined comedian and writer Iris in a tweet, who also followed the thought with several major puns.
“If this struck a chord you should follow me,” she wrote. “Fine tune your feed with my sharp thoughts, and my flat ones too”

I just feel like we’re being really generous letting guitar center pass this thing off as a G pic.twitter.com/8HuaFk5LEm
— Iris (@Jest_Iris) February 28, 2022

Speaking to Ad Week, Guitar Center’s chief marketing and communications officer Jeannine D’addario, explained the origins of the logo, which was hand-drawn by an employee at the time.
“It was designed in the ’60s without a computer, which is challenging when you move into a digital environment,” D’Addario said. It was also noted in Ad Week’s report that the corporation went through six months of logo testing before accepting that ‘Guitar’ just wouldn’t be the same without the capital ‘G’.
“I joke that my legacy will be, ‘I’m the girl who put the ‘G’ in ‘Guitar Center,’” added D’Addario.
If you’re still on the fence about whether the old or new logo was a better fit, this 2020 tweet from writer Keaton Patti – who replaced other logos with an ‘acoustic guitar G’ – should help you decide.

It’s crazy to me Guitar Center uses this guitar as a G in its logo, because it barely looks like a G.
Anyways, here’s what it’d look like if other things used that guitar as a G. pic.twitter.com/3pmgcjSGao
— Keaton Patti (@KeatonPatti) November 17, 2020

The post Uitar Center has finally added the letter ‘G’ to its logo appeared first on Guitar.com | All Things Guitar.