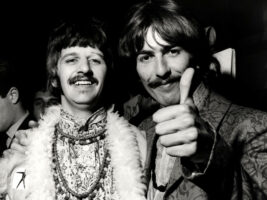 A previously unheard song featuring Beatles George Harrison and Ringo Starr, recorded in 1968, has been played to the public for the first time since its discovery in a loft.

READ MORE: Paul McCartney on John Lennon and Yoko Ono’s peace views: “So much they held to be the truth was crap”

The track is called Radge Shaam, and was written and produced by radio broadcaster Suresh Joshi in 1968. It was discovered in Joshi’s loft over lockdown by a friend who had come to check on him.
Earlier today, the track received its first radio broadcast on BBC Radio Merseyside, and was played to an audience of 100 at Liverpool’s Beatles Museum. According to the BBC, the response was positive, with the museum’s manager Paul Parry saying the audience (including Joshi) “loved it.”
Radge Shaam was recorded as Joshi was working on the music for the documentary East meets West, at London’s Trident Studio. Harrison and Starr turned up during a break from recording Hey Jude and offered to play. Alongside the two Beatles, Indian classical musician Aashish Khan also plays on the song.
Joshi also told the BBC about the song’s meaning, and how it remains relevant today. “The song itself revolves around the concept that we are all one, and that the world is our oyster,” he said. “[That is] something that we have all realised during this pandemic.”
Parry also revealed Radge Shaam would be released on Thursday, with all proceeds going towards charity.
The post Unheard 1968 song featuring George Harrison and Ringo Starr played for the first time appeared first on Guitar.com | All Things Guitar.