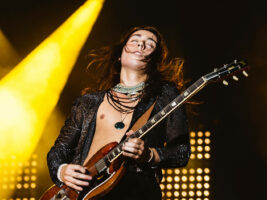 Greta Van Fleet are seeing a boom in sales and streams, thanks to a viral TikTok trend based on imitating frontman Josh Kiszka’s stage presence from their 2019 SNL appearance.

Billboard has reported that the band’s catalogue has seen a 122 per cent increase in streaming, with the song in question re-entering the charts. Alongside the increase in streams, the band’s digital downloads increased 461 per cent, and their album sales increased 86 per cent across 16-22 July.
The particular tune featured in the TikTok trend, You’re The One, boasted the biggest increase. Its on-demand streams jumped a humongous 508 per cent, and its digital download sales saw a whopping 1,955 per cent increase.
When the song re-entered the hard Rock Digital Song Sales charts, it did so at number two. It previously had peaked at number five in February 2019.
While You’re The One led the charge for the band, other individual tracks saw big leaps too. Highway Tune jumped 410 per cent in its sales while Heat Above had a 62 per cent increase.
So while the band might have initially felt a little iffy about the trend, which mainly riffed on Kiszka’s performance style, it’s hard to argue with the outcome for their profile.

Greta Van Fleet are currently gearing up to tour the US, in support of their recently-released album The Battle At Garden’s Gate.
The post Viral TikTok trend sees Greta Van Fleet’s streams and sales rocket appeared first on Guitar.com | All Things Guitar.