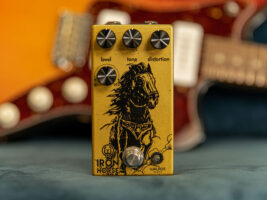 Walrus Audio has updated its Rat-style distortion, the Iron Horse, to version three.

The pedal keeps the same core approach, with the core control set of volume, gain and tone remaining. However, in place of previous versions’ clipping diode selection switch, there is now a blend control. This chooses between silicon and LED clipping, or a mix of the two for even more textural variation.
Image: Walrus Audio
The other major tonal update is the behaviour of the distortion control when set to minimum. V3 has fixed the volume drop-off, which can be handy if you’re stacking the Iron Horse into a lot of other pedals and want the low gain without losing volume.
Aside from these changes, however, it’s the same punchy, thick distortion that the originals are known for. The gain knob ranges from light overdrive to stoner-doom saturation, and the tone control allows you to dial out as much high-end as you need.
V3 also adds top-mounted jacks and true-bypass soft-relay switching. There’s also a new illustration of the pedal’s battle-ready stallion from David Hüttner.
The Iron Horse V3 is available now for $199. Find out more at walrusaudio.com.
The post Walrus Audio introduces Iron Horse V3, adding a new clipping blend control appeared first on Guitar.com | All Things Guitar.