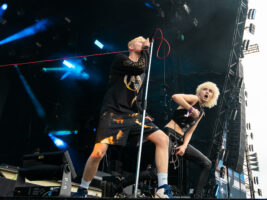 Electronic rock duo Wargasm have accused the security team at London’s Scala venue of verbal aggression and unnecessary use of violence against band member Sam Matlock. The incident allegedly occurred after Matlock stepped in when witnessing a bouncer being “verbally aggressive” towards Wargasm’s female tour manager following their performance at the Facedown rock club night held in Scala on Friday (5 November).
The band wrote in a statement that: “After [the verbal aggression], in a completely overzealous and unnecessary use of force, three bouncers then dragged Sam into the backstage toilets, where two of them slammed his head against the toilet seat and held his head in the toilet bowl while the third bouncer held the door closed with his foot.
“At this point, luckily, another member of our touring party was able to intervene and remove Sam from the situation, not without injury.”
A photo of these injuries was also shared alongside the statement.
The band continued: “Wargasm’s management have been attempting to contact Scala directly over this weekend to no avail. Scala has still not responded to our team’s emails. We feel that anyone visiting or playing at this venue should be aware of our deeply shocking experience and the treatment of our team by the current security staff. It’s now been made clear to us that as long as this current security team are under employment there, from our experience, we do not consider Scala a safe venue, especially for women.
“Wargasm will not accept aggression, verbal or physical, towards any members of our team, and we are very aware that this kind of attitude can be a behaviour that repeats and rarely happens in total isolation. It, therefore, must be looked at with immediate effect by scala to ensure the safety of everyone who uses their facilities in the future.”
Musician Kier Kemp responded to Wargasm with his own account, saying: “The bouncers at Scala are criminals. They locked me outside once and tried to stop me from playing my set when I did Facedown.”
The Facedown event’s official social media posted a statement acknowledging the incident, extending apologies to Wargasm and noting that the Scala employ the security, rather than Facedown. In a separate tweet, the event called Wargasm’s account “sickening stuff.”

Scala has not responded publicly to Wargasm’s account. Guitar.com has reached out to the venue for comment.
The post Wargasm accuse London venue Scala’s bouncers of “overzealous and unnecessary use of force” against guitarist Sam Matlock appeared first on Guitar.com | All Things Guitar.