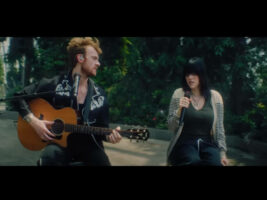 The EP was released back in July as a surprise for fans and featured two acoustic tracks, The 30th and TV. For the performance, Eilish was accompanied by brother and producer Finneas on a Taylor acoustic guitar for the stripped-back tracks, and delivered her trademark deft tones for the live renditions.
In a statement (via Rolling Stone), Eilish said of the performance: “Singapore was one of the first places I ever went on tour. I was only there for a day and absolutely fell in love with it.”
She continued, “The Cloud Forest is one of the most beautiful places I’ve ever seen in my life. These two songs really are just very important to me in a lot of ways. I feel really connected to them and very personally protective over them, and I wanted to have some sort of peace with the songs that felt really intimate and personal. It just felt really comfortable to do it in a place as beautiful at the Cloud Forest.”
You can watch both performances below:

Back when the EP was released, Eilish spoke to Zane Lowe at Apple Music 1 where she explained the meaning behind both songs: “It’s called The 30th because something happened on November 30th, and it had just been the most indescribable thing to have to witness and experience,” She said.
She also told of how TV addresses the topic of abortion with the overturning of Roe V. Wade in the United States. In the song she sings lyrics of “The internet’s gone wild watching movie stars on trial, while they’re overturning Roe v Wade”, she reflected on the line with Lowe stating, “We wrote that line a few weeks before it was officially overturned. It was a placeholder of doom.”
Eilish performed alongside Paramore’s Hayley Williams at Coachella Festival earlier this year, and released her most recent album Happier Than Ever back in 2021, you can check it out below: