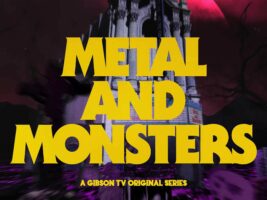 A brand new series to Gibson’s online video channel, Gibson TV, Metal And Monsters will take viewers through the synergetic history of heavy metal and horror movies in hour-long instalments.

Featuring interviews and never-before-seen footage and photos, the show is fittingly presented by long-serving bassist for Rob Zombie, Matt ‘Count D’ Montgomery and will take viewers on an in-depth tour of the landmarks of monster culture and its soundtrack, beginning with Don Dokken and Robert Englund in a celebration of the 35th Anniversary of A Nightmare on Elm Street 3: Dream Warriors.
With rare photos from the Dream Warriors video shoot on show for the first time, Robert and Don share insights and anecdotes about everything from their influences to behind-the-scenes tales of one of the most successful horror franchises of all time.
“We’re going to discuss everything on this show from Anthrax to The Amityville Horror,” says Count D, sitting in a throne in the 2,000 seat Los Angeles theatre, “from Iron Maiden to Invaders From Mars; from Megadeth to Maximum Overdrive; from Slayer to Suspiria. And the best part is, you never know who’s going to stop by to join us. If you like blast beats and things that go bump in the night, then this is the show for you.”
The first episode of Metal And Monsters also features an in-depth interview with Carcass guitarist Bill Steer about the band’s 35-year history, as well as a segment called Terror Trek, which takes viewers to the offices of Super7 in San Francisco to interview founder Brian Flynn and the Super7 team about their projects with Motörhead, Iron Maiden, and Megadeth. The episode also revisits Metallica’s seminal 1991 record The Black Album and offer fans a chance to win exclusive prizes.
Check out the first episode of Metal and Monsters below.