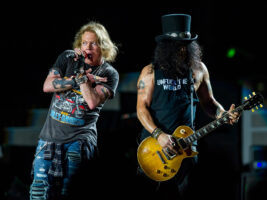 Guns N’ Roses have debuted a new version of a previously unreleased song known as Silkworms, which has been retitled Absurd.

The hard rock band performed the track at Fenway Park in Boston, Massachusetts on Tuesday (3 August). Fans in attendance were quick to upload footage of the new song to YouTube.
“Some of you might have heard this under another name, but this is really kind of absurd to try this,” Axl Rose introduced the song. Watch it below:

Silkworms came out of the sessions for 2008’s Chinese Democracy, the album which heard the hard rock band introduce industrial and electronic elements to their sound. Notably, Absurd features much less in the way of electronics than Silkworms. It does however, have Slash.
Since partially reuniting in 2016 – with Slash back on guitar and Duff McKagan on bass – Guns N’ Roses have been touring actively; their Not In This Lifetime tour is currently the third-highest grossing tour of all-time.
Back in December 2020, Slash said he was hopeful that the band would be releasing a new album by the end of 2021.
Last week, the guitarist announced that his newest album with Myles Kennedy and The Conspirators would be the first release of Gibson’s new record label, Gibson Records.
The post Watch: Guns N’ Roses perform new version of rare, unreleased song, Silkworms appeared first on Guitar.com | All Things Guitar.