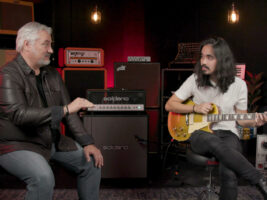 Mateus Asato has shown off his latest pedalboard in an in-depth rundown of his rig, where he also discussed his signature Jackson Audio Asabi Overdrive.

The interview was conducted by Sweetwater’s Mitch Gallagher, who quizzed Asato on the travel ‘board he had put together for shows around Brazil. On it are four Jackson Audio pedals: the Asabi and Golden Boy overdrives, Bloom compressor and Modular Fuzz. The virtuoso completed his chain with a Dunlop Echoplex delay and a Strymon Flint reverb-tremolo.
“The Flint is probably one of my favourite pedals ever,” Asato said, calling the pedal a game-changer for him. “The tremolo is a great option as well. [I’m] kind of getting into the keys now, and I’ve been playing the Fender Rhodes [and] it has the tremolo.”
“For me, when it comes to a tremolo effect on guitar, I try to imitate what the Fender Rhodes can provide.”
Earlier this year, Asato partnered with Jackson Audio for a drive pedal to match his playing. The transparent drive section of the two-channel dirt box, dubbed the Asabi, provides “a natural boost” for a characterful clean tone, explained the guitarist. Meanwhile, Asato set the distortion section at about 75 per cent to achieve what he described as a classic hard rock sound.
“When the guys [at Jackson Audio] came to talk to me about having a signature pedal, it was right after NAMM last year and then COVID hit,” Asato explained. “I had to go back to Brazil and we had to discuss a lot of things through [Zoom or Skype]. And it’s hard to say ‘I want it to sound like this’ and we had to ship a lot of stuff. They had to send a lot of things to Brazil and customs there can be a little [bit of a] pain.”
Check out the rest of Mateus Asato’s pedalboard in the video below: