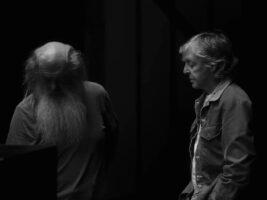 A new trailer for the Hulu documentary series entitled McCartney 3, 2, 1 has landed, featuring producer Rick Rubin and Paul McCartney chatting about the history of the Beatles and how their hits came together.
READ MORE: Peter Jackson’s Beatles documentary Get Back will debut exclusively on Disney+ this November
“In this six-episode series that explores music and creativity in a unique and revelatory manner, the documentary gives a front-row seat to Paul and Rick in an intimate conversation about the songwriting, influences and personal relationships that informed the iconic songs that have served as the soundtracks of our lives,” a synopsis for the series explains.
Craig Erwich, president of Hulu Originals and ABC Entertainment said of the series: “Never before have fans had the opportunity to hear Paul McCartney share, in such expansive, celebratory detail, the experience of creating his life’s work – more than 50 years of culture-defining music.
“To be an observer as Paul and Rick Rubin deconstruct how some of the biggest hits in music history came to be is truly enlightening.”
Directing the show is directed by Zachary Heinzerling, who was also behind the 2013 Beyoncédocumentary series Self-Titled and the 2013 documentary Cutie And The Boxer.
All six episodes of the documentary will land on Hulu on 16 July, preceding the premiere of Peter Jackson’s The Beatles: Get Back, which will land on Disney+ in November 2021. This makes use of 55 hours of previously unseen footage from the 1969 Let It Be sessions, and will arrive in three two-hour parts.
Take a look a the trailer below