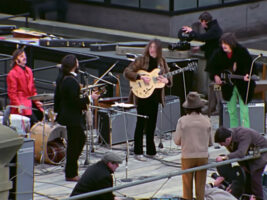 Watch: The first trailer for The Beatles: Get Back docuseries has landed

The first official trailer for The Beatles: Get Back, Peter Jackson’s three-part documentary series on the Fab Four has been released.

The trailer offers fans a taste of what to expect when the series lands on Disney+ next month. Its three episodes will be released on 25, 26 and 27 November.
Set in January 1969, Get Back will draw from a vault of restored, never-before-seen footage of the band, documenting them as they work against the clock to prepare 14 songs for their final album Let It Be and prepare to play their first live concert in over two years.
A description of the film reads: “Faced with a nearly impossible deadline, the strong bonds of friendship shared by John Lennon, Paul McCartney, George Harrison, and Ringo Starr are put to the test.”
The series will also, for the first time ever, show the Beatles’ final live performance together, the iconic rooftop concert on London’s Savile Row, in its entirety.
Watch the trailer below:

Footage for the series – consisting close to 60 hours of unseen footage and 150 hours of unheard audio – was shot by Michael Lindsay-Hogg, who used it in the 1970 documentary film Let It Be.
The Beatles: Get Back is said to present a positive counter-narrative to Let It Be, which bared conflicts and arguments between the band’s members, and show off a lighter side to the group’s last moments together.

The post Watch: The first trailer for The Beatles: Get Back docuseries has landed appeared first on Guitar.com | All Things Guitar.