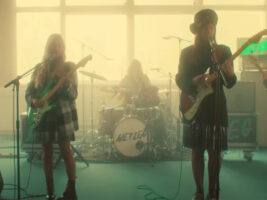 10/10-rated Wet Leg recently took Fender’s new Player Plus Meteora HH for a spin during their Player Plus Session for the brand, with front women Rhian Teasdale donning the 3-colour Sunburst, and Hester Chambers on a dazzling Cosmic Jade PP Strat while guitarist/keyboardist Josh Mobaraki rocks on a PP Nashville Telecaster.

The boldly offset Meteora was originally launched as a member of the Parallel Universe series back in 2018, albeit with a heavy dollop of Telecaster in its DNA. The current twin-humbucker version arrived when it was reimagined as a Player Plus series guitar earlier this year.
Wet Leg aren’t the first to team up with Fender to showcase the Meteora and other Player Plus series guitars in all its glory, with previous performances from the likes of Japanese Breakfast, Ghostmane and Teezo Touchdown.
You can watch the session below, which features performances of tracks Wet Dream, Ur Mom and Oh No.

If Wet Leg have managed to sway you into considering the Meteora, it is available in an additional two finishes to the ones played in their video – Bel Air Blue and Silverburst. It also hosts a set of Fireball humbucking pickups with an S-1 Switch for coil split and a two point tremolo with block steel saddles. The quirky new model earned an 8/10 from us here at Guitar.com for its modern versatility.
Wet Leg are currently touring following the release of their debut self-titled album and a mighty performance at Glastonbury Festival, you can get tickets to see them here.
You can also find out more about the Player Plus Meteora HH on Fender’s website here.
The post Watch: Wet Leg perform with Fender’s Player Plus Meteora electrics in new live session appeared first on Guitar.com | All Things Guitar.