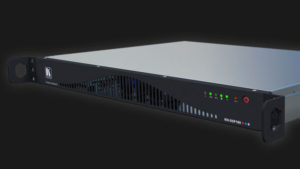 Waves MultiRack is a software host used by FOH and monitor engineers to run multiple simultaneous instances of the same award-winning plugins used in recording studios and mixing rooms the world over.

The Kramer Network Server, with Kramer Network and DSP functionality for large-scale audio deployments, provides DSP-over-IP and enables simultaneous processing of 64 of its more than 1000 input channels – and distribution to over 1000 outputs. The unit is fully compatible with any Dante audio signal and provides auto-detection of all Kramer devices and their functionality. The KN-DSP100’s processing is powered by Waves and seamlessly integrates with all standard IT infrastructures.

“As a music producer and sound engineer, I realise the significance of audio in our everyday lives. From that understanding, the KN-DSP100 was born,” said Yuval Kramer, director of audio at Kramer.

“That’s why partnering with Waves, a powerhouse in professional audio who share this view, seemed natural. KN-DSP100 marks the beginning of an audio revolution in the pro-AV industry,” added Kramer.

Mick Olesh, Waves EVP of sales & marketing, said: “We are pleased to collaborate with Kramer and to have our technology power the KN-DSP100. With our software at the core of its processing capabilities, it significantly enhances its user’s workflow and overall sound shaping and control.”