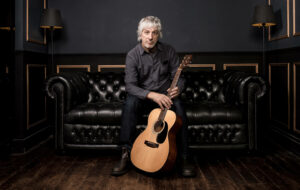 Lee Ranaldo refuses to be pigeonholed. Sonic Youth’s guitarist extraordinaire-turned-solo star, producer, author, painter and poet is at home on a Thursday evening in Lower Manhattan when we connect via Zoom. We are ostensibly discussing the new Sonic Youth release In/Out/In/– the legendary experimentalists might have finally called it a day in in 2011, but the record’s five tracks are previously unreleased both on vinyl and digital. They run the gamut from a tight three and a half minutes to over 12, and were laid down during the final decade of Sonic Youth, between 2000 and 2010.

Some were recorded in their Massachusetts rehearsal room during sessions for 2009’s final LP, The Eternal, while the remainder were recorded in California, New Jersey and Echo Canyon. The first decade of the new Millennium was a fruitful one for the band, who kept up their impressive clip of new studio albums (four alone in that last 9 years, including beloved records Sonic Nurse and Rather Ripped) but also releasing more leftfield projects on their SYR (Sonic Youth Recordings) label.
In/Out/In is a psych-improv, ambient jungle of riffs and melodies that spindle into crooked shapes, meandering and ebbing from the core melody before wheeling around and back, seeking the heart of the song again. It exemplifies the chemistry of Sonic Youth, Gordon and Ranaldo’s thick-as-thieves relationship in lead and rhythm, a rock ‘n’ roll dream team.
“It’s always fun when there’s a new bit of Sonic Youth music released and we’ve been releasing a lot of stuff on Bandcamp in the last year or so, which has been really rewarding for us. But, it’s all been digital-only, no actual artefact of the stuff, so to be able to release this on vinyl, we were just happy to do it.”

Real release
In/Out/In is a Three Lobed Records release, the label run by Cory Rayborn, a friend of the band with whom they’ve released band recordings and various solo works. Two of the tracks (In & Out, Out & In) had previously been released as part of a Three Lobed box set of various artists from 2011 called Not the Spaces You Know, But Between Them.
“It’s been fun to see the reaction to having an actual album out, as opposed to just a digital release,” Ranaldo continues. “People seem to have been, honestly, quite excited about it, which is really fun from our point of view.”
A decade after Goo, which had preceded tours with Nirvana and transformed Sonic Youth into MTV and Lollapalooza catnip, the band had nothing to prove. In/Out/In reveals a band feeling their way through whatever personal dissonances were creating division – not least Moore and Kim Gordon’s disintegrating marriage – to find musical harmony. Their dedication through the long, venturing, sometimes ecstatic and sometimes mournful instrumentals feels like a hunger for togetherness, like a game in which each takes turns to hide and be found, or to lead the pack through unknown territory and establish some form of unspoken rules.
“I remember all of this stuff. I had a hand in putting a lot of it together in terms of the studio work behind it, and it’s always fun to revisit this stuff,” Ranaldo muses. “Steve Shelley and I have been manning the Sonic Youth Bandcamp site, so we’ve been combing through looking for stuff to put out. Some of this stuff we’ve only heard relatively recently. We were able to find three new tracks to go with the two Cory had already released, and that made a nice set. The two old ones, In & Out and Out & In were released on 12-inch EP. Machine, Basement Contender and Social Static had never been anything other than digital releases before.”