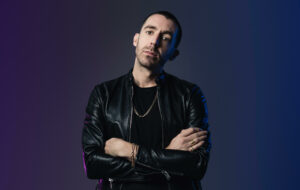 “When you’re angry and you want to shout… I’ve done that. This is where I’m at right now” Miles Kane on embracing soul and the British weather on his latest album

Los Angeles has a lot going for it, not least great weather and a history of providing the setting for some killer tunes. But it doesn’t have the sort of cold that eats into your bones while you stand in a queue outside a club, making the rush of warmth and noise when you cross the threshold overtake you like a wave. When Miles Kane swapped the west coast for a return to London two or three years ago, he unknowingly took a step towards trying to capture that head-spinning sensory event on wax with his new record Change The Show.

READ MORE: “We should have called the record Pen Pals” – Tom Bukovac and Dean DeLeo on their long-distance collaborative album Trip the Witch

“I love them nights,” he says. “We used to go to this place in Liverpool called Le Bateau. It was like an indie thing downstairs and upstairs it was all Northern Soul and Motown. That was my first taste of that thing – we’d have our fake IDs, freezing outside waiting in the queue. You’d go in and it was so loud, almost euphoric. That’s before you’ve done any drugs or had a drink. It was like a hit, this heat, this pounding Motown thing.”
Change The Show has twin strands of influence holding it together. It’s a nod to Kane’s youth, where every family do would be soundtracked by a Motown compilation on the stereo, but also an acknowledgement of the debt owed by artists such as Paul Weller and Marc Bolan, whom Kane owes plenty to himself, to the artists and sounds that underpinned the history-making soul label. “My mum and my family are so into the Four Tops, the Temptations, and the Supremes. This was the soundtrack to my childhood, really,” he says. “It was something I never grew out of.”

Where the heart is
Appropriately, the retro sheen of the record is propped up by the reedy, unmistakably English indie-rock that is Kane’s bread and butter. For each horn flourish there is a bratty vocal or segue that recalls the kaleidoscopic psych-pop of 1960s London. Nothing’s Ever Gonna Be Good Enough, a duet with Corinne Bailey Rae, is a picture book example of this dynamic, with its glitzy stomp and descending piano line offset by brittle, circus mirror guitar lines.
But, and it’s a question that will pop up over and over again, how much of this stylistic cross-pollination can be put down to a simple attempt to avoid sliding into pastiche and empty genre tourism? “That definitely gets presented to you. Is it too far? But it’s what’s right for me,” Kane observes. “I’ve always hinted at it. And even the Last Shadow Puppets [his band with Arctic Monkeys’ Alex Turner], it’s in that world.
“If anyone knows my music there’s always been elements of soul and Motown. I think for me it’s a progression in songwriting. When you’re angry and you want to shout, it’s more punk, I’ve done that. This is where I’m at right now in life and musically. I didn’t want to fight that. If someone thinks, ‘He’s gone soul,’ then I don’t care. They can think that. I don’t want to waste my energy on that. And they will, don’t you worry.”

Change The Show was recorded almost on the off chance with David Bardon and Oscar Robertson of psych-rock band Sunglasses For Jaws, whose own album Everybody’s Made Of Bones is only a few months old. Kane met the pair through a mutual friend and they set about pestering him to come down to their studio. By the time he wandered into their orbit last summer, just as Covid-19 restrictions eased enough to allow it, he’d already assembled an album’s worth of sleek demos with producer Jamie Biles. Those would soon fall by the wayside.
“They’re about 10 years younger than me,” Kane says. “I’ve known them for a couple of years. They’ve got this no frills place in a warehouse in Hackney Wick. One day I went in there with Tell Me What You’re Feeling, which I guess is the most Northern Soul song on the album, and we demoed it. It was incredible.”
Image: Eleanor Jane
It takes two
Kane has long been known – perhaps to his own irritation – as a collaborator, whether that’s with Turner or in the all-star covers group the Jaded Hearts Club, alongside Muse’s Matt Bellamy and Blur’s Graham Coxon. But he clearly gets a kick out of it, describing working with Bardon and Robertson in terms of chemistry and laughter rather than simple convenience.
“The song’s got to come from you,” he observes. “The song you write on the acoustic, you could take to anyone and do it in any style that you want. For this I was so clear with what it was. Maybe it was fate that I knew Dave and Oscar and for years I’d brushed them off. I’ve got to give it to them for their persistence.”
The songs were reworked to give them a more grounded, in-the-room feeling, with collaborators, including ​​Joao Mello on sax and piano and vocalist Holly Quin Ankrah, sliding in and out. Takes were kept to a minimum. “I was quite blown away by how their mindset and tastes were so similar to mine,” Kane says. “It was a no brainer. All the songs were written when I met them, and we knew more or less what way to go. It was so much fun actually recording these tunes. We’d do the drums, bass and keys live, I’d do a guide vocal and rhythm and we’d get that core thing done and build on that. Even the vocals, it was all painless. A few takes and we had them.”

Chk please
The guitars on the album are trebly and loose, with Kane resorting to making ‘chk-chk-chk’ sounds to explain his less-is-more approach. “On every tune I’m just doing the chips,” he says. “It’s almost like a shaker.” He pulled up an old collaborator for the sessions, a blue 1960s Telecaster that he first began playing in the indie-rock trio the Rascals, which he fronted to the tune of a few big-name support slots and one album between 2007 and 2009.
“I got it years ago, when I was 19, 20,” he says. “I modified it. I had these Seymour Duncans put on, and I wanted it really fat, gnarly. It was a really chunky rock sound. I hadn’t used the Tele in ages, but I had the original pickups. The guy swapped them back for me like fucking 15 years later. It’s that and an old Fender Champ. That’s all my guitar is, basically, on this whole album.
Image: Eleanor Jane
“On a couple of the solos I’ve maybe got a fuzz, and we had a Magnatone amp with the vibrato on that. The treble is on full and it’s almost this rhythm thing. I’ve really gone off pedals. I just love a great guitar and a great amp. That’s where I’m at. So many people have got a million pedals and it sounds shit. I’m into the rawness of it, me.”
There is a classic distinction on the record between the buzzy, vibrant sound and lyrics that dig a little deeper, with Kane musing on growing older, and feeling at times like he’s slipping out of frame, alongside several portraits of his former self as scratchy, careless and unfocused. “It’s more melancholic,” he says. “They are a bit reflective, a bit personal. I like that balance of lonely lyrics over these upbeat songs. That’s the thing that makes it unique. They’re working against each other, but in a way that makes it fit.”
Image: Press
Change The Show is, essentially, defined by this desire to hang together as a single piece. From its cohesive instrumental palette through its sequencing, with the closer Adios Ta-Ra Ta-Ra written late in the day because Kane felt it was missing a fitting send off, it wears the effort in its curation proudly. It feels in many senses like a reset after so many years in the London-to-Hollywood indie milieu. Kane is somewhat reluctant to go that far, but it’s fairly obvious that the thought has occurred to him.
“Stylistically, visually, down to the album cover and the clothes, I did want it to be a reset, but maybe that seems too dramatic,” he says. “I don’t want to erase everything I’ve done before because I love that. But it is what it is. There are no preconceptions here. I wanted it to be classic. I didn’t want to be in a jumpsuit with eyeliner on. I wanted to be looking sharp with a suit and a skinhead. That paints a picture of what phase you’re in, I guess. This is me. There’s no character. This is what it is.”
Miles Kane’s Change The Show is out now through BMG.
The post “When you’re angry and you want to shout… I’ve done that. This is where I’m at right now” Miles Kane on embracing soul and the British weather on his latest album appeared first on Guitar.com | All Things Guitar.