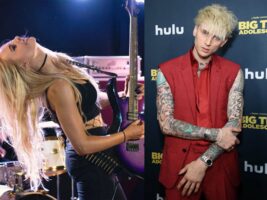 It has been announced that YouTube guitarist Sophie Lloyd, will be joining Machine Gun Kelly’s live band for his Mainstream Sellout tour.

READ MORE: Machine Gun Kelly is done with pop-punk, will return to rap for next album

The YouTuber, who currently boasts 722,000 YouTube subscribers, and 604,000 Instagram followers is frequently known to perform shred versions of popular rock and metal tunes such as AC/DC’s Thunderstruck and Pink Floyd’s Comfortably numb.

Spotted rehearsing with Machine Gun Kelly and his band on Instagram yesterday (May 24) which was posted on MGK’s account and then re-shared to Lloyd’s story, it has been confirmed that the YouTube star will be going on the road with Kelly for his European Tour which will start in Cologne, Germany and will finish in Amsterdam, The Netherlands.
She later then shared a second story in which she wrote: “Secret’s out! I’ll be joining Machine Gun Kelly on his Mainstream Sellout Tour this year!!”
This is not the first time that Lloyd has mingled with a-list musicians, as in March last year she was endorsed by Muse’s Matt Bellamy, who sent her a reimagining of the Origin of Symmetry Manson MA EVO Floyd Rose Sustainic Guitar as a gift.
However, unfortunately for Lloyd, this live band might be short-lived, as MGK announced last month that he is done with pop-punk, and will be returning to rap for his next album
In an interview with Audacy’s Kevan Kenney, Kelly announced this genre shift, saying, “I’m going to make a rap album for myself. For no other reason, no point to prove, no chip on my shoulder.”
While he did not rule out a third pop-punk album which will join albums Tickets to My Downfall and Mainstream Sellout, he states that he won’t release a third unless he feels as if “it’s missed”.
For more information about tickets for the Mainstream Sellout Tour, visit machinegunkelly.com
The post YouTube guitarist Sophie Lloyd is the newest member of Machine Gun Kelly’s live band appeared first on Guitar.com | All Things Guitar.