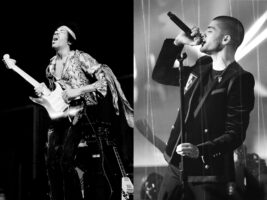 Zayn Malik has paid tribute to Jimi Hendrix after releasing a cover of Angel to celebrate the late guitarist’s 80th birthday.

The cover was released today (25 November), using Hendrix’s original guitar part, with Malik’s new vocals laid over the top. The original track was released posthumously in 1971 on the album The Cry of Love, after the guitarist’s premature death at 27 in 1970. It was entirely written and self-produced by Hendrix.
In a post to twitter, Malik revealed the news that he had been asked to collaborate with the guitarist via Hendrix’s Estate, noting that it was “such an unexpected and huge honour”.
“I have so much respect and admiration for Jimi, his music and fans,” the former One Direction member writes. “Angel is out now – hope you love the track as much as I do.”

Being asked to collaborate to celebrate @jimihendrix 80th birthday was such an unexpected and huge honour.  I have so much respect and admiration for Jimi, his music and fans. ‘Angel’ is out now – hope you love the track as much as I do. Happy 80th Jimi. https://t.co/YJmisXMJYc pic.twitter.com/J4x5eDUqud
— zayn (@zaynmalik) November 25, 2022

“We are pleased that Zayn has been inspired to use original music from Jimi Hendrix’s ‘Angel’ in his recording of the song,” Hendrix’s Estate says. “We’re hopeful that this version of a Hendrix classic will enlighten a new generation of listeners about Jimi’s genius and further propel his continuing legacy.”
Even the video that accompanied the song is very emblematic of the art style synonymous with Hendrix, as it focuses on the two musicians’ names in the centre of the screen.
You can watch the full video below:

This release marks Malik’s’ first release of the year after a mixed reception of his third solo album that he released in 2021, Nobody Is Listening.
The post Zayn Malik covers Angel to commemorate Jimi Hendrix’s 80th birthday appeared first on Guitar.com | All Things Guitar.