Hi, I purchased a bass awhile ago that’s a custom build with parts that are all high quality and obviously cost someone a fair bit at one point.
The story I got with it is a guy had two stingrays and wanted modulus necks on them after the cutlass style but also wanted a fancier top than musicman produced at the time so he contacted Roger Giffin a boutique builder who at the time was still based in the UK. (His stamps in the neck pocket)
He had two bodies built and imported the necks himself… 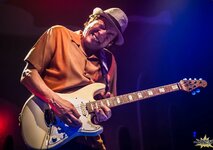 Cutlass with an Albert Lee neck

Luke III no sound coming out