Help: Need some support with a 1989 Stingray

about ten years ago, I bought a gorgeos, all black, second hand 1989 stingray (model “GUITAR 5 HOLE NECK PLATE BLACK MATTE NO LOGO” according to the serial number lookup) and played it for three more years, until my wrists gave in (genetic issues, I don’t think it was the basses fault :-P) and I first started to play way less regularly and finally stopped completely after a couple more months.

Today, six years later, I was finally was able to make the hard decision to let go of that gorgeous beast as I feel that I will not be able to honor it appropriately anymore and I believe others should experience the same fun I had with it.

The only problem is, that I have a hard time estimating how much I can still ask for it.
On the one hand, it is pretty used, has it’s dents and scratches and could use some service, on the other hand I believe it still sounds very nicely with that smooth roaring undertone and should be quickly up to speed after paying a little attention to servicing it.

I saw everything in the range from 1000$ to 2000+$ and couldn’t find a lot of information or references for that specific model.

What do you guys think? From your experience, is this a rather common piece, something on the rarer side, or something in between? 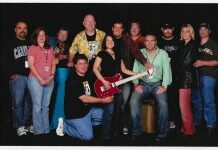 Music Man Guitars for Sale or Trade: NO COMMENTS PLEASE!

What is used on the BFR Necks?

What are the differences between Luke I,II & III?Finish clarification also needed