The JP 20th anniversary JP6 showed up last week and it is indeed a beautiful guitar and plays wonderfully. Really couldn’t put it down. Superb attentional to detail on the finish and form, and the it just sounds tremendous plugged in or unplugged. On about the third day I put it through the paces with the amp and noted a couple problems with the piezos. The low E piezo has a static noise when the trem is moved and the G piezo is way louder than the others.

So, no NGD photos yet as I sent it back in already. A replacement is ordered but won’t be here until mid to late August! Seems these models are a bit difficult to get ahold of! I didn’t want to keep this defective one around and risk scratching it or something.

The piezo issues are probably an easy fix for EBMM but it is very disappointing that they escaped their factory. Speaking of which, it was purchased at Sweetwater and they do a “full inspection” as well and they didn’t catch the defects (not the first time…bought a PRS from them late last year and the PU selector switch didn’t work! But, Sweetwater takes care of the customer and in both cases new replacements were sent no problem).

The lesson: give your new guitars a *complete* run though, no matter the brand or cost!

My JPXI and Majesty are happy though, they are getting played again after being ignored. 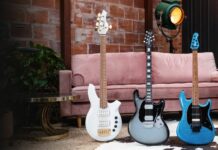 Bongo 4HH pickguard, where to find??