So yesterday I was messing around with my attenuator I just got, initially was playing my Les Paul Traditional since it’s new and shiny. Everything was good, sounding great.

I switched to my Majesty (2019 BFR Dargie, bought new in march 2022 from Guitar Center) since it had been a week or two since I played it due to NGD syndrome.

It worked for about 20 seconds- I switched to the magnetic pickups from the piezo- and I got sound for under 5 seconds and it died. No sound- aside from a…

Who decks their Luke III Whammy?

Will an Axis Guitar fit in a Cutlass Guitar case. 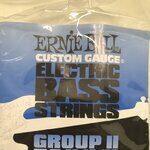