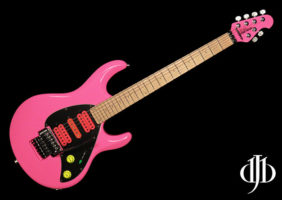 Thanks for the kind words and comments on yesterday’s NYNGD #2017-4! So sorry about the fact that the guitar photos were missing for most of the day… Apparently a landscaper doing final winter cleanups was doing his thing at a neighbor’s property and the gasoline in the trailer (for the mowers) caught fire from the mower’s muffler and the whole trailer went on fire. Right next to a telephone pole. Which also went on fire. On which the CATV/fiber lines are run. Which also caught on fire. So my whole neighborhood had no phones or internet. And thus my NYNGD didn’t have photos… Crap! So go check it out if you didn’t: NYNGD #2017-4!

So.. before we begin (jeez, Jeff, with the delays — get the show on the road already!)… Before we begin, DrKev is prohibited from posting on this thread because he had unkind words on this guitar! 😀

I first laid eyes on this guitar over on the Show Me Your Silo thread, posted by GWDavis28 from a listing on Reverb. Now, some folks (DrKev) would scoff at a Silhouette refinished in Neon Pink, but not your old pal DiBart! See, my first high-dollar guitar, back in 1989 before discovering EBMM in 1992, was an Ibanez JEM 777 in Shocking Pink. When I saw this guitar, I got nostalgic. And the wheels started turning. I wasn’t going to spend what he was asking, but I made the seller a fairly lowball offer figuring “what the hell… he probably won’t accept.” He did. 😮

The guitar arrived a few days later and my first opinion wasn’t so good — the custom refinish was a mess. A mess. It was apparently refinished by Patrick Sims, who I’ve heard is very hard to work with (neverending delays, etc.) but that his paint work is top, top notch. The guitar has Sims’ signature in the rear trem cavity, and it looks like like it based on his site, but I can tell you, this work is not top notch at all. There’s a blem in the paint on the front of the guitar, the edges of the floating trem route are rough/sharp, and the headstock the edges where the face of the headstock meets the natural finish sides literally looks like it was taped with masking tape and painted with a spray can. Rough… 😡

OK, so let’s get past the paint. Then there was the matter of the pickguard, which the previous owner hand cut the humbucker holes with a sheetrock knife. Not good. And the wiring was a little screwy with Duncans. So… remember I mentioned my wheels were turning. I have extra Silo HSH Floyd pickguards that I bought from the factory some years ago. And I ordered up a DiMarzio Evolution HSH set in pink, which is the standard in current JEMs (original JEM was PAF Pros, but I have 20 Silos with PAF Pros, so let’s try something new!). I also ordered original OEM JEM neon yellow knobs and a neon green switch tip… which required an Ibanez 5-way switch as the tip is made for a smaller shaft. I threw all the components into the pickguard for these photos, although it’s not actually wired inside… I’ll do that after I finish all the work for this year’s NYNGD run. 😮

The final photo below is the new Shocking Pink Silo next to my 1989 Ibanez JEM 777 in Shocking Pink. I know this is an EBMM forum and we don’t generally post non-EBMM guitars, but in this case cut me some slack, just showing where the theme comes from. 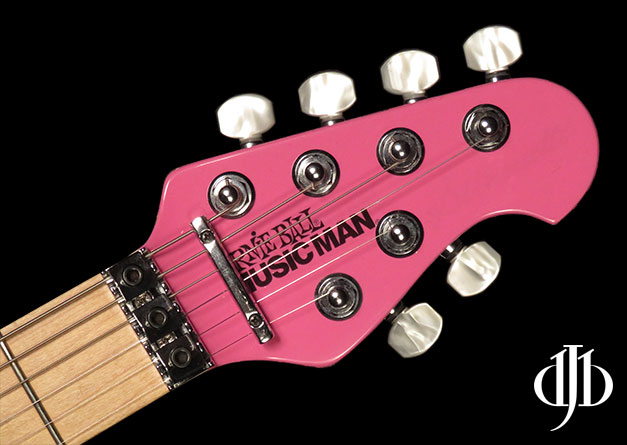 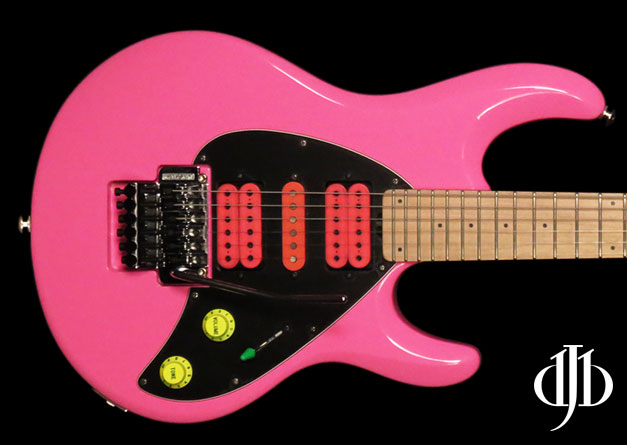 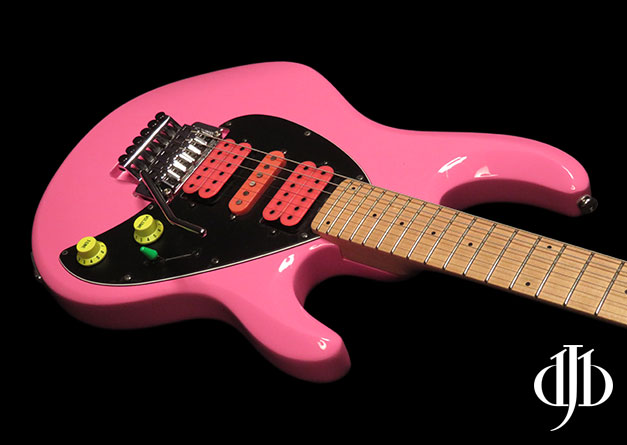 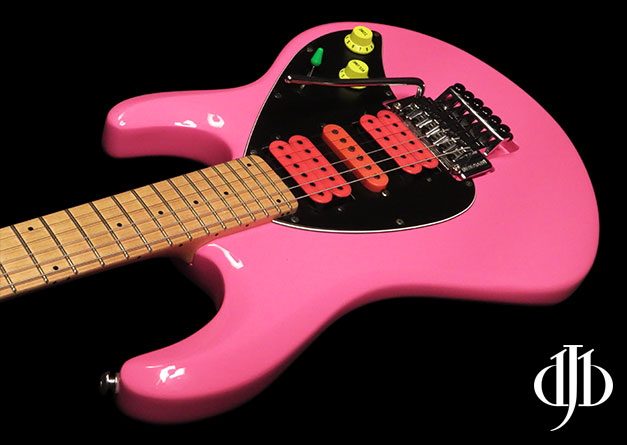 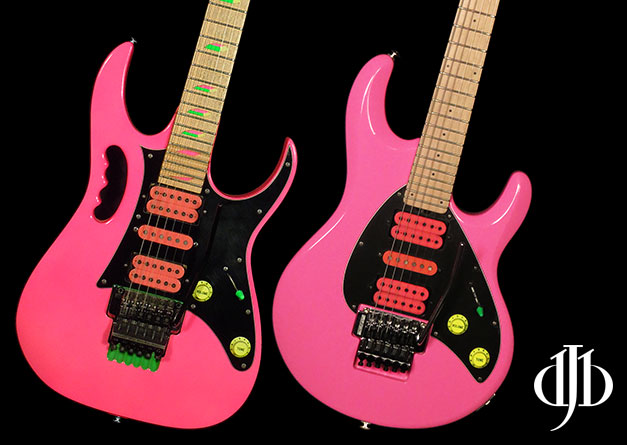 I’ll be back tomorrow with another NYNGD: New Year’s New Guitar Day!

Thanks for looking everyone! 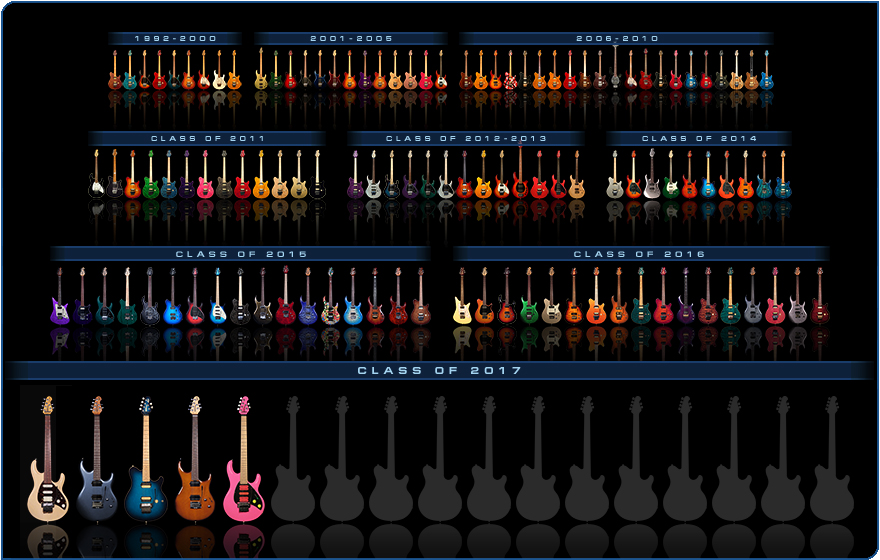 (The back story in case you’re new to my NYNGD: For the past couple of years I’ve done a fun thing that most of you I think enjoyed, and I thought I would do it again this year. Every year, I am a slacker about keeping my Guitar Gallery up to date… So, as a fun holiday thing, let’s launch a guitar in the Guitar Gallery each day leading up to New Years Eve! In the past I’ve received PM’s about my collection and whether I play all of these guitars. 🙂 The same question came up during my NYNGD posts a few years ago and my answer was pretty detailed and well thought-out, so please check it out here!)

(Also, in case anybody gets any funny ideas — these guitars are not at my house. They are all in my very secure and alarmed studio facility. I usually only have two guitars floating around the house…)

Majesty owners. I need help with these Humbuckers! Want to swap them out