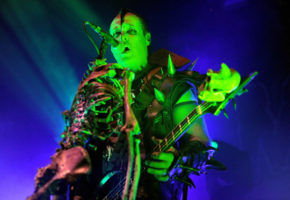 Is there any holiday more tailor-made for heavy metal than Halloween? Of course not! And so, below, we offer up 10 tunes to soundtrack the spookiest day of the year. Happy trick or treating…

Is there any holiday more tailor-made for heavy metal than Halloween? Of course not! And so, below, we offer up 10 tunes to soundtrack the spookiest day of the year. Happy trick or treating…

King Diamond is a band so perfect for October 31 that you can even get Halloween-themedmerch. This song is from King Diamond’s 1986 debut album, Fatal Portrait. And for a guy who has been wearing face paint for more than three decades, it’s hardly surprising to hear him sing the words “Every night to me is Halloween.”

“Pumpkins grin in their despair”… “Spiderwebbed and glazed in frost”… Welcome to the most depressing Halloween ever, courtesy of the “Drab Four,” the one and only Type O Negative.

Ozzy’s werewolf get-up in this clip is enough to bring you to tears…of laughter. But despite the high camp of the clip, the song, with Jake E. Lee on guitar, is a killer. Awoooooooo!

Given their band name—not to mention the fact that their mascot was a demented-looking jack o’ lantern with spindly green arms—it only made sense that Helloween would eventually write a song about the spookiest of holidays. Across more than 13 minutes of classic German power metal, the band lays out a tale of well, trick or treating, basically. And singer Michael Kiske warns of the dangers of getting a trick: “Bad luck if you get a stone / Like the good old Charlie Brown.”

Really, almost any Ghost song would fit here. But for some reason the one about the chapel that “smells of dead human sacrifice” feels most appropriate.

Though this song has basically nothing to do with Halloween, per se, if your neighbor was Glenn Danzig, one could easily imagine a mother telling her children not to walk his way. Maybe skip that house and start trick or treating next door…

Years before Dee Snider was making horror flicks like ‘Strangeland,’ he was writing tunes like this one, which is basically a ghost story set to music. “Captain Howdy and its counterpart, “Street Justice,” were grouped together on Twisted Sister’s classic Stay Hungry album under the heading “Horror-Teria (The Beginning).” The songs later formed the basis of ‘Strangeland,’ with Snider himself in the Captain Howdy role.

Even by Eighties metal standards, the film Trick or Treat was pretty over-the-top, encompassing reincarnated rockers, backward masking and laser-shooting guitars, as well as a cast that included Ozzy Osbourne, Gene Simmons and the dude who played Skippy on Family Ties. All of which means you should check it out immediately. As a bonus, there’s also a kickass soundtrack from Fastway.