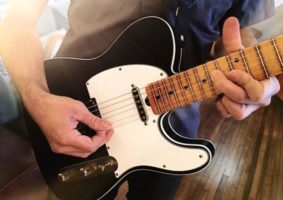 A Six-Note, Three-Octave, Major-Scale Exercise to Help You Know Your Way Around the Fretboard

As you can tell from my previous blog posts, learning and knowing the fretboard to the best of one’s ability is of the utmost importance to me—and something I stress to all my guitar students.

How much do I stress this point?

So much that last week one of my students wanted to know why is it so important to me.

I thought about it for a day or two. That’s why I love teaching; it gets me to reevaluate all that I know. The reason it is so important to me is because I feel that the more knowledge you have about your instrument and how to get around on it, the more beauty you can create with it. You will be able to summon any possible combination of notes and phrases to emote the exact feeling you are trying to convey.

It is my job as a teacher to come up with interesting, unique and cool ways to master this task. That being said, here is an interesting, unique and cool major-scale exercise to help you learn and eventually master the fret board. This exercise is based on the six notes of any major scale played in three octaves up and down the neck starting on different notes of the scale in order diatonically.

This exercise is played in the key of F major. It is actually moveable, but for the constraints of space, we will use F major.

This is a very challenging exercise for a few reasons. Firstly, the rhythm pattern is very difficult, 16th-note triplets played at about 120 bpm. I highly recommend NOT playing with a metronome at first until you get the stretches and proper fingerings down.

After that is accomplished, I would start with a metronome, slowly, gradually building up to a fast speed. Secondly, although the finger patterns are similar for each note group, they do change as you switch the starting note of each phrase. So you have to really think about what you are playing quickly at a fast tempo. If you really want to take this exercise to the next level, say each note as you play them. Your significant others, parents, roommates and pets may think you are crazy, but, hey, you’ll be learning the fretboard in an expeditious manner and becoming the master of your chosen instrument so it’s all relative!

After you master this exercise in F major, move it around to other major keys. When you are jamming and soloing, remember this lesson. These phrases will sound killer with an amp on 11 and a wah pedal. Just saying. Get out there and pick up that guitar and play, just like yesterday. As always, any feedback and comments are welcome.

Guitarist Richard Rossicone is a veteran of the New York City and Long Island original and cover band scene. He’s been playing since he was 8, when he attended his first concert (Kiss) and saw Pete Townshend smash a guitar. He has studied with various instructors over the years, which led him to a career in music therapy. He began his educational journey at Queensboro Community College, where the faculty introducing him to classical music. He received his associate’s degree in fine arts in 1997 and went on to receive his bachelor’s in music therapy in 2001 and his master’s in music therapy from New York University in 2004. He’s been Board Certified as a music therapist since 2002. Richard continued his studies at C.W. Post University, pursuing a second master’s degree in classical guitar performance and music history, studying under Harris Becker. He’s been teaching guitar, piano and theory since 2002 and in 2006 started his own company, Rossicone Music Studios. Visit him at Axgrinder.com and his Complete Guitarist Facebook page.