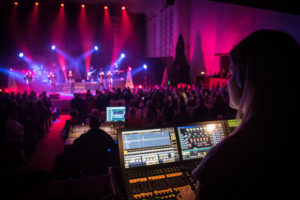 A Coda Audio PA, Avid consoles and Shure mics were used during the seven-date festive tour

A Coda PA, Avid consoles and Shure microphones were used during the seven-date tour, stopping off at venues including Liverpool’s Philharmonic Hall and finshing up at Indigo at the O2 in London.

Leal said: “It’s the best sounding system I’ve ever heard,” and was chosen for its main array and suitability for theatre and academy type venues. The band also played some large concert halls, where they had the flexibility to cover the extra space.

A typical set up was 12 ViRAY left-and-right with three sensor-controlled SCP subs a side on the floor (six in total), together with six TiRAY front fills.

Mario also covered the balconies with extra Coda C712 loudspeakers in some of the bigger halls – especially useful when audiences were sitting behind the PA when the balconies curved all the way round to the sides of stage.

The whole system was driven by 20 of Coda’s proprietary Linus 10 amps, which, were set up and aligned utilising LINUS Live software which gives full networked control over the amps and the arrays, with the EQ and zoning taken care of in Mario’s Lake control rack.

“The mid-range is simply amazing – I have never heard clarity like this before – you can hear absolutely all of the details,” Leal added.

The Overtones used an eight-way Sennheiser SR2000 IEM system from Adlib, with no side fills, and for atmosphere, four of Adlib’s new MP5 wedges were placed across the front.

Two Adlib MP4 subs were allocated to the drummer and the bassist, with the third shared between the guitarist and keyboardist, who were positioned adjacent to one another onstage

The Overtones’ mics were six (five and a spare) Shure UR4D hand-helds with a Beta 87A mic capsule for lead singer Timmy Matley.

They didn’t tour a specific monitor tech, so Mario was kept busy, but – always positive – he reveals, “We had a couple of days production rehearsals at Capital Studios in London and that was enough time for us to start the tour in really good shape”.

“The band were all very professional and absolutely lovely people,” Leal concluded.