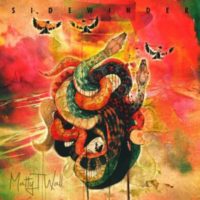 For anyone who might question Matty T. Wall’s love for the guitar, just watch the video for the title track to his new album, Sidewinder, where rapid-fire camera cuts show him ripping through the song’s sparkling power-pop riffs on a bevy of new and vintage six-string beauties.

As for how he handles himself on the instrument? Look no further than the first cut on Sidewinder, an instrumental called “Slideride,” on which Wall, over a hopped-up barroom boogie beat, whips out searing, quicksilver bottleneck licks that demonstrate an infectious exuberance for, and an extraordinary command of, his instrument.

From there, the prodigiously talented Australian singer, songwriter and guitarist takes the listener on a 12-song musical journey that runs through an impressive array of sounds and styles, from blues to rock to country to pop.

To be sure, Wall is an artist steeped in blues and roots music, but his appeal lies in his not being beholden to any traditions or mores. The instrumental “Sophia’s Strut,” for one, marries a sprightly blues lick to an odd-metered percussive stomp, over which Wall spins towering curlicues of notes. And standout cut “Shake It” peppers a deep-in-the-pocket groove with heavily distorted hard-rock riffing and clean, funky comping, before ultimately exploding into a double-time shred fest.

But for all the guitar pyrotechnics (and to be sure, there are plenty to go around on Sidewinder) Wall’s true strength is as a songwriter and also a synthesist. He crafts hooky, heavily rhythmic tunes that, at least stylistically, have one foot planted in the past—but always with an eye focused firmly on the future.

Bring Me The Horizon’s Lee Malia: “I wanted to go as Slayer as I possibly could…”

The HyVibe System transforms any acoustic into a smart guitar

Steven Wilson: “I wanted to make an album that was more reflective of the electronic world we live in – the guitar is there,...

Dave Keuning is back in the studio with The Killers

Dweezil Zappa sets up shop on Reverb.com to sell a wealth of custom guitar gear