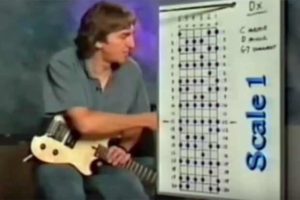 One of the late Allan Holdsworth’s many strengths as a guitarist was his ability to improvise.

“I knew if I wanted to improvise over chord changes, I’d have to figure out all the scales that went with all those chords,” Holdsworth said.

In the mystifying (yet very relaxing) clip below—before he starts demonstrating his 10 most useful scales—Holdsworth explains how he tried to use math as a means of mastering scales when he was younger. As a result of his studies and other influences, he realized chords are merely parts of scales that are being played simultaneously.

“As the chord changes go by, I don’t so much think about a static chord voicing changing,” he said. “I just see the notes on the neck change. For me, the only thing that makes one scale different from another is not the starting note; it’s the separation of the intervals. For example, if it’s a D minor major seven scale, the name I give the scale is only a means of identification. It’s for no other purpose.

If you’re a wee bit confused, you’re in luck because Holdsworth explains it all in the video. In the process, he identifies 10 “really usable scales” that you can use for “most everything.” And, while it might seem as though the lesson is “all talk and no action,” Holdsworth does play guitar at various points.

Like a lot of guitarists (myself included), Holdsworth had his own musical language and, as a result, his own naming conventions for several scales—and who knows what else. As one YouTube commenter put it, Holdsworth could be considered a test case of “reinventing the wheel.”