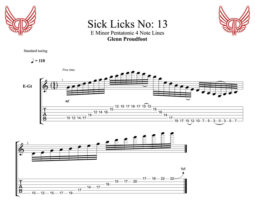 In this Sick Lick, I’m using a technique inspired by Allan Holdsworth.

I remember listening to Holdsworth play when I was a kid—with complete disbelief at what I was hearing. It almost didn’t sound like a guitar. The speed and the wide intervalic playing was simply amazing. It wasn’t until I saw live footage of him playing that I began to understand how he created that amazing sound.

Obviously, it was a combination of his incredible knowledge and technique. The technique was what really grabbed me, rather than the theoretical side of his playing, as I was simply to young to grasp the complexities of his musical knowledge.

What I saw was Holdsworth’s incredible stretches and use of four-note-per-string fingerings to create the most unbelievable-sounding runs. (Traditionally, we are taught to play scales and runs using a combination of two and three notes per string). I’m not saying that this the secret to his playing—not by any stretch of the imagination.

Rather, this was what I took out of his style and approach. I believe it’s important to listen to as many guitar players as possible and do your best to learn something from them all.

It’s not hard to play wide stretching runs on a single string, but it gets tricky when you attempt to use this technique all over the neck. When you start applying this approach, you tend to cover the neck very quickly. It requires immense concentration and control of your fingerings. Being a rock guy, I tend to apply all of my techniques to the pentatonic scale first then slowly branch out into other scales.

The problem with this is that these techniques are not really suited to the pentatonic. They are better suited to modal playing, but I always love a challenge, and as you can hear from this lick, it really creates an amazing sound! You will notice I incorporate my thumb in this lick also; I do this to enable myself to play longer one-string runs. I start this lick with a four-note run on the A string with the fourth note being the start of the three-string arpeggio.

This is repeated on the G string, but this time its only a three-note run with the third note being the start of the arpeggio. From here it gets tricky! On the high E string, we are fretting four consecutive notes moving up the scale of the pentatonic, then we move back down the scale using the same notes. From here it leads into a six-string arpeggio starting on the high E and ending on the low E. This is played with all up-strokes.

From here I play nine descending notes all on the low E string, I do this is with a combination of my left thumb and utilizing the “over the top technique.” It’s a very complex line but extremely fun! I use the same approach to ascend back up the scale. This particular line is what I would focus on the most. It is by far the most technically challenging part and a very unique way to play up and down the pentatonic scale on one string.

The final run in this lick is similar to the way I start the lick; I finish with a four-note run on the high E string leading into to a full bend on the 22nd fret. As with any technique I create, my main focus is that they enable me to play lines or runs that would otherwise not be possible at speed. There’s no point using techniques that only “look cool” if they have no practical use or if they don’t allow you to do anything different on the guitar that you could do using traditional techniques.

Thanks and I hope you enjoy! Please feel free to join me on YouTube here.