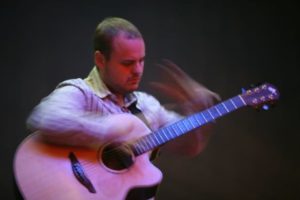 The video went viral on YouTube, achieving millions of views by early 2007. Prior to his cyber surge, McKee had already issued three solo acoustic guitar albums and been flying under the radar, making ends meet as a guitar teacher.

Today, with his “day job” behind him, and several more releases under his belt (solo records, as well as discs with Josh Groban, Lee Ritenour and Don Ross), he’s a literal “road warrior,” playing hundreds of concerts per year—including opening several shows for Eric Johnson and Dream Theater. Let’s take a closer look at what makes him tick, with an examination of “Drifting,” the song that started it all.

In “Drifting,” which the guitarist has stated was inspired by the great Preston Reed, McKee strings his Greenfield G4 acoustic in an alternate tuning referred to as DADGAD.

This tuning makes it possible to fret power chords, like the G5 in FIGURE 1a, with a single finger. In McKee’s case, he uses “overhand” fretting to facilitate percussive slaps with the fretting hand (notated with an X on beats “two” and “four”) and other techniques (see the video lesson for this column at GuitarWorld.com). Over this type of groove, McKee taps a note on the G string (use index finger), holds it down, and plucks the top two strings with his ring (a) and middle (m) fingers.

A “Drifting”-inspired melody using this technique is shown (without the chords and smacks) in FIGURE 1b. Both parts are combined in FIGURE 1c—a pattern at the heart of the “in-the-style-of” figure at the end of this lesson.

FIGURE 2 depicts another percussive passage with the addition of fingertip taps on the face of the guitar (the 16th-note triplets with the stems pointing upward), similar to what McKee uses in the intro and outro to “Drifting.” For this figure, aim for rhythmic precision, focusing on the timing between the fingertip taps (the ring, middle and index fingers rolling in smooth succession) and body smacks, practicing until you can produce a sound like a marching snare drum roll.