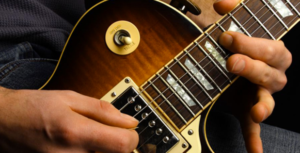 Being able to sweep pick arpeggios cleanly and fluently requires a great deal of practice, but the technique is just that—an approach to articulation on the guitar that will yield a certain sound.

The real value of the technique only reveals itself when applied in a musical context, and the more formidable that context is, the more powerful and effective the technique will sound.

In this column, I’d like to demonstrate some of the sweep-picked arpeggios featured in the title track to my debut album, No Boundaries, a piece I composed with the primary objective of demonstrating how I would apply various techniques musically in a song.

The excerpts included in this column were designed to not only give you something to play that sounds musical, but also to help you further develop your sweeping technique, with some hammer-ons and pull-offs added.

FIGURE 1 illustrates a six-bar passage from “No Boundaries,” and throughout the example, I switch from one sweep-picked arpeggio shape to another every two beats, which requires some quick, precise position shifts. I begin on an Am arpeggio in 12th position, starting with my index finger at the 12th fret on the A string, after which I hammer-on to the 15th fret with my pinkie, then use my ring finger to barre across the D and G strings at the 14th fret, then switch to the middle finger at the B string’s 13th fret, followed by the index finger at the 12th fret of the high E string.

I then begin beat two with the high A root note, hammered-on with the pinkie at the 17th fret, pull off back to the 12th fret and then descend through the same series of notes in reverse order. As the phrase ascends, I drag the pick from the fifth string to the first string in a single downward motion, and then, when the phrase descends, I perform an upstroke sweep across the first through fifth strings. As I switch to each new arpeggio indicated, I use my index finger to initiate the new shape. In bars 2–5, the new arpeggio often occurs on the upbeat of beat two or beat four, which serves to make the pattern sound less predictable.

In FIGURE 2, I perform similar arpeggio shapes but add tapped “extensions” as the highest notes. For each chord in the progression, the ascent and descent is performed twice, so the chord changes occur less frequently than in FIGURE 1.

The first note in each arpeggio shape is fretted with either the pinkie or index finger, which facilitates smooth movement from one shape to the next. On each ascension, once the down-sweep reaches the high E string, I hammer up with the pinkie and then apply the fretboard tap with my pick-hand middle finger. Work through these shapes slowly and carefully before increasing the tempo.