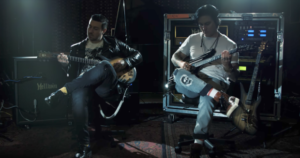 Avenged Sevenfold have announced a new acoustic album, Live at the Grammy Museum.

Set for release this Friday, December 8, the digital-only album is partially a benefit for the Grammy Museum, with a portion of the album’s proceeds going to its education initiatives.

You can check out its tracklist below.

For his part, the band’s guitarist, Synyster Gates, has recently been busy with his own education initiative, the Synyster Gates School. The guitarist launched the free online guitar school with his father, acclaimed session guitarist Brian Haner Sr., last month.

For more on the school, stop by syngates.com. For more on Live at the Grammy Museum, and all things Avenged Sevenfold, stop by avengedsevenfold.com.

Live At The Grammy Museum tracklist: