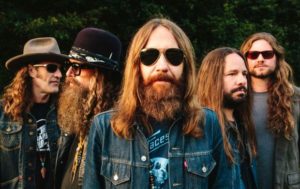 Rock-and-roll powerhouse Blackberry Smoke have premiered a new song, “I’ll Keep Ramblin’,” and you can hear it below. The fun, upbeat Southern-fried rocker boasts a bonus dose of guitar fireworks, courtesy of pedal steel great Robert Randolph, who also co-wrote the tune with frontman Charlie Starr. The track is from the band’s highly anticipated new album, Find a Light, which will be released April 6 via Thirty Tigers.

“The new album is a melting pot of Blackberry Smoke music with a wide range of sound and emotion,” Starr says. “I think it’s our most inspired work yet.”

Find a Light is available for pre-order. For more about the band, visit blackberrysmoke.com.