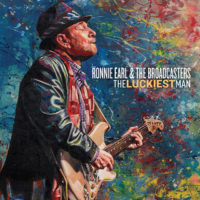 Blues guitarist extraordinaire Ronnie Earl has announced a new album, The Luckiest Man. The disc, which was recorded with Earl’s longtime band, the Broadcasters, will be released November 17 via Stony Plain Records.

According to Earl, The Luckiest Man is “a traditional blues album of remembrance, love and unwavering resolve to live with faith and gratitude.”

The album follows the sudden loss of Jim Mouradian, the band’s bass player (and a respected luthier), who died after a show in January. In fact, the album is named after something Mouradian said fairly often: “I’m the luckiest man you know—and I don’t even know who you know.”

The band addresses death and loss in “Death Don’t Have No Mercy” and “Jim’s Song.” On “Long Lost Conversation,” Earl is reunited with some of the earliest Broadcasters (and current members of Sugar Ray and the Bluetones), including Sugar Ray Norcia (vocals, harp), Anthony Geraci (piano), Mike Welch (guitar), Neil Gouvin (drums) and Michael “Mudcat” Ward (bass).

Earl also puts his indelible stamp on interpretations of “Ain’t That Loving You,” “So Many Roads” and “You Don’t Know What Love Is.” You can see a full track list below.

In case you were wondering, Earl is a three-time Blues Music Award winner as Guitar Player of the Year, a DownBeat magazine winner for “Blues Album of the Year,” an associate professor of guitar at Berklee College of Music and has taught at the National Guitar summer workshop in Connecticut.

In the words of the late B.B. King: “[Ronnie Earl] is one of the most serious blues guitarists you can find today. He makes me proud.”

For more information, check out the preview below, visit ronnieearl.com—and stay tuned for a song premiere later this month.

Brian May jams with Alex Skolnick, Bumblefoot and Stu Hamm as an all-star line-up takes on the Hammer to Fall Challenge