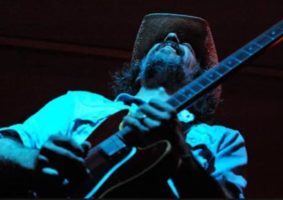 Last month, we explored using triadic (three-note) chord shapes as a means to fortify a deeper understanding of chord “grips” and intervallic relationships on the fretboard, as well as how one can use these shapes as a springboard for improvising single-note solo melodies.

An essential element in this investigation involved connecting these triadic shapes when applying them to a standard “one-four-five” blues progression.

This month, we’ll continue with a look at four more triadic shapes, as well as a handful of melodic phrases that are based on them.

Using the key of E again, the three chords that make up the progression are E (the one chord), A (the four chord) and B (the five chord). As is customary in blues, dominant seven chords—in this case, E7, A7 and B7—are used instead of straight major triads. FIGURE 1 illustrates three-note voicings for these three chords played on the D, G and B strings.

I begin in second position and play E7, A7 and B7, then shift up to fifth position and resolve back to E7, this time using a first-inversion voicing, with the third of the chord, G#, sounded as the lowest note. Notice that when moving from the initial E7 to A7, the lowest note, E, remains the same, while the two higher notes, G# and D, both move down one fret to G and C#, respectively.

This A7 shape then moves up two frets (one whole step) to B7, and then all three notes move up the fretboard to the next available chord tones of E7, sounded in ascending order as G#, B and E. The idea with this lesson is to utilize each of these dominant seven voicings and shapes as “guideposts” for soloing. In bars 1 and 2 of FIGURE 2, simple melodic phrases are presented that use the E7 chord tones E, G# and D as points of focus. In bars 3 and 4, I take the same approach with A7, and then, in bars 5 and 6, with B7. I then round out the exercise by moving up the fretboard to play lines that revolve around the higher E7 voicing.

Now let’s apply this approach to the 12-bar blues progression, as demonstrated in FIGURE 3. In bar 1, all of the notes played are part of the E7 chord. In bar 2, I expand the approach by incorporating some notes from the E blues scale (E G A Bb B D) while accentuating the triadic tones of A7.

This approach is carried through the entire example, so as you play through the progression, keep in mind which of the notes are chord tones and which are passing tones that connect the chord tones, as well as how I sometimes anticipate the next chord in the progression via the contour of the melodic phrase, playing a couple of the next chord’s notes “early” (before the chord officially changes).