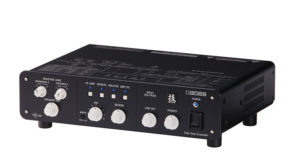 Boss is launching a new guitar amp range, the Nextone series, plus an innovative Waza Tube Amp Expander which it is billing as ‘a unique new command center for tube-based guitar amplifiers.’

Both Nextone amps feature a dual-channel design with clean and lead channels, Boost and Tone switches, a three-band tone stack, and a presence control. Players can further customise the sound with the Nextone Editor, fine-tuning bias, sag, EQ, effects, and other settings to match their individual style, touch, and pedal preferences.

Boss says the optional GA-FC foot controller provides a command centre for channel selection, Tone, Boost, effects, pedal volume, and more. Alternately, up to three FS-series footswitches can be used to control various functions. There’s also a line out for sending a direct signal to a PA, plus a phones/recording output for silent practice and tracking sessions.

In addition to providing communication with the Nextone Editor, the amp’s USB jack functions as a direct recording interface for a DAW. Using the editor software, the character of the direct sound can be set to one of three Air Feel settings for a range of miked cab tones.

The Tube Amp Excpander offers extensive connectivity and real-time control options and includes Boss effects along with support for storing 10 onboard setups for instant recall.

Boss claims that its advanced reactive load section allows players to crank their valve amp to its sweet spot while controlling the volume to suit any situation. the Tube Logic approach gives user-variable control of the all-important impedance interaction with the amp’s output transformer: ‘…eliminating the tone and feel artefacts introduced with other load boxes. Selecting from sixteen different settings, users can make their amp behave exactly as if it were connected to their favorite speaker cab. Any tube guitar amp up to 150 watts is supported, from vintage combos to modern high-gain heads’.

After setting up their sound, users can even distribute it to multiple destinations at once. Parallel speaker outputs can drive up to two stage cabs from the integral 100 Watt Class AB analogue power stage. Balanced mono and stereo line outputs include tone shaping from miked cab emulation or user IRs, providing ready-to-mix direct signals for the main PA mixer, stage monitors, and recording devices. There’s also a USB output for tracking with a DAW and communicating with editor software, plus a phones output for quiet practice sessions.