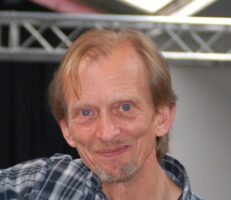 Britannia Row Productions Training managing director Mike Lowe said: “He is and will be sorely missed”

Sound engineer Barry Bartlett who worked with Britannia Row for many years passed away on Friday March 30 following a year-long battle with cancer.

A statement from Britannia Row says: “Barry was passionate about music in all its forms and in its history, live audio, passing on his vast knowledge to others through his course writing and editing and tutoring. He had a keen interest in good red wine. He drank with appreciation and always responsibly. Above all, he was passionate about his family, his wife Fiona and their two daughters, Isabella and Sophia. Both Isabella and Sophia are brilliant young musicians playing violin, clarinet and guitar. Barry was immensely proud of their achievements.

“One of the early name bands that Barry worked with after attending Goldsmiths College was Squeeze. There followed a long career in live sound engineering working closely with artists such as Damon Albarn. Barry loved projects involving acoustic instruments from full orchestras to electric ensembles incorporating acoustic instruments. The more esoteric and ethnic the instruments, the more Barry enjoyed the challenge.”

In 2012, Bartlett pushed the idea that Britannia Row Productions’ notes for training its young audio technicians should be developed to offer training externally. From this, Britannia Row Training (BRPT) was born. Since Brit Row ran its first course in September 2013, Bartlett went on to develop several other courses that are in the BRPT repertoire, right up degree level with the three-year Year BSc Hons Degree Course validated by the University of Northampton and run in conjunction with South Thames College. In just over four and a half years, Bartlett has put over 120 young people on the road to careers in live audio.

Britannia Row Productions Training managing director Mike Lowe said: “He is and will be sorely missed.”