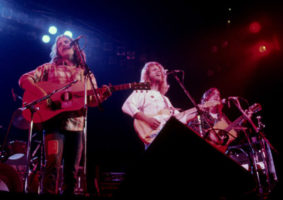 The capo is to guitars what sugar—or Stevia, if you prefer—is to food. It makes everything sweeter.

Musicians started noticing the capo’s inherent sound-sweetening properties in the early 17th century, when primitive versions of the handy accessory were employed to raise the pitch of a host of fretted instruments. The point of a capo is, of course, to be able to perform a song in a different key while using the same fingerings and chord formations you’d use in an open position.

This enables performers to stick to positions they’re more comfortable with and to enjoy all the benefits—including ringing, open strings—high up on the neck. Capos also facilitate or create alternate chord voicings and help performers accentuate certain melody lines in a song. Of course, the higher up the neck you go with a capo, the more you change the voicing of the guitar—to the point that you can even imitate a mandolin, as demonstrated by music editor Jimmy Brown (our own “Capo Crusader”) in the now-vintage May 2014 issue of Guitar World.

Former Eagle Don Felder says it best in the top video below, which he created for Guitar World:

“When I originally wrote [‘Hotel California’], it was in the key of E minor, which is a really great guitar key to play in and write in. We recorded the whole track in E minor, and then Don Henley went out and tried singing it … and it was way too high for him … .

“So I took a guitar, went out in the studio and said, ‘OK, let’s move it down to D minor.’ Still too high … C minor, a little bit too high; A minor; no, that’s too low. It wound up being in the key of B minor, which is on the seventh fret.” The seventh fret is exactly where Felder’s capo wound up; the song is played as if it were in E minor.

Below, members of the Guitar World staff—including Jimmy Brown, tech editor Paul Riario and online managing editor Damian Fanelli—have rounded up 15 essential “capo songs”—out of hundreds of worthy choices—that show off the benefits of, and alternate voicings created by, the capo. We tried to make sure no bands are repeated (although three bands are, indeed, repeated); we also set out to create a well-rounded, diverse list. Note also that we’ve chosen videos that aren’t necessarily vintage or classic—or that don’t even show the “classic” lineups of certain bands; they do, however, show the capo’d guitar being played (in most cases, at least).

Feel free to suggest other capo songs in the comments below or on Facebook!

As stated earlier, to play the Eagles’ “Hotel California” in its original key, try using a capo on the seventh fret.

The song is played as if it were in E minor, the song’s original key, as explained by Don Felder above (and in the top video below). This makes the song “sound” in B minor. Note: The capo is used on the acoustic guitar part that starts the song. In the top lesson video below, Fender also shows you how to play part of the guitar solo (Note that Felder plays “Hotel California” in A minor now because he sings it when he performs it, and it works better with his vocal range). Below that, you’ll find a clip of Felder performing the entire song with his band (Remember, we sought videos that best display the capo and fingering).

This classic 1971 Jethro Tull tune features a capo on the third fret—for the acoustic guitar part, that is, which is performed by Ian Anderson in the vintage live video below. The acoustic part is played as if it were in E minor, but it “sounds” in G minor. Don’t worry, we’ll have more classic Tull for you later in the list!

In this classic Stones song Keith Richards employs a capo on the seventh fret with his guitar in standard tuning. Released in 1969, the song appeared on Let It Bleed.

Jumping ahead to the height of the Britpop-dominated mid-Nineties, we bring you one of the songs Oasis will be remembered for—”Wonderwall,” which was composed by Noel Gallagher. To play the song in its original key (as thousands of wide-eyed kids of all ages sing along with you), put a capo on the second fret and play the song as if it were in E minor. It, of course, “sounds” in F# minor.

Although this one doesn’t normally leap to mind when one thinks of “popular capo tunes,” this rocking Quadrophenia track from 1973 was recorded by Pete Townshend using a capo on the third fret. The song, which is played as if it were in a power-chord-friendly A, “sounds” in C.

George Harrison was fond of sticking a capo on the seventh fret of his guitar and playing songs in the “D” formation that sound like they’re in A. He did it on the Beatles’ “If I Needed Someone” and followed it up a few years later with 1969’s “Here Comes the Sun,” one of his greatest compositions. You’ll find two videos below. The first one is a “Here Comes the Sun” lesson by Jimmy Brown. Below that, you’ll find a clip of Harrison playing the song live. Although we tried to find the superior two-guitar performance from the Concert for Bangladesh, this much later video below shows Harrison’s fingering nicely.

This classic Fleetwood Mac song is played in drop-D tuning—the studio version, that is—with a capo on the second fret. The song, which emphasizes a “swampy stomp” groove, incorporates an octave bass line on the guitar and some greasy finger picking.

“Free Fallin’,” the most popular track from Petty’s first “solo” album, 1989’s Full Moon Fever, was played like so:

• Capo 1 main, low guitar part and second, higher guitar part (played as if the song were in E; sounds in F.)

• Capo 3 third guitar part (played as if the song were in D; sounds in F.) In this song in particular, we hear the capo truly “sweeten up” the beefy chords.

This beautiful song by James Taylor is played as if it were in the key of A. It “sounds” in C. It features open-chord embellishments and sliding chord shapes.

When we spoke to Ed Sheeran awhile back, we asked him to name a few acoustic guitar songs every guitarist should know how to play. He named this one, a bouncy track from Bob Dylan’s 1963 album, The Freewheelin’ Bob Dylan. At least John Mayer knows how to play it—and we’ve included his live video below. Note that there aren’t many (or any) videos on YouTube that show Dylan playing this song the way he played it in ’63. There is, however, an interesting clip of Dylan performing the song with Eric Clapton. By the way, “Blowin’ in the Wind” is another fine capo tune by Dylan (capo 7). Almost forgot: For “Don’t Think Twice, It’s All Right,” it’s capo 4; play a C chord; “sounds” in E! There are some fun changes in this tune.

“No Sugar Tonight”
The Guess Who | Capo 4

This classic Guess Who tune—which is performed with a capo as a straight chord melody—is played as if it were in D. It “sounds” in F#. Note: We’re talking about the original version. In the video below, you’ll notice the capo doesn’t play a huge role in the song in modern times.

“Norwegian Wood (This Bird Has Flown)”
The Beatles | Capo 2

This late-1965 Beatles song is played as if it were in the key of D, but it “sounds” in E, with a capo on the second fret. Right-hand-wise, it’s a “strum-picky” chord melody—not quite picking, not quite strumming. Because there are no videos of the Beatles performing this song live (because it never happened), we’ve provided a basic (non-Guitar World) lesson video that shows everything clearly, including the capo on the second fret, the chords and embellishments.

This 1974 Harry Chapin tune is played as if it were in the key of A but “sounds” in F. It’s another example of a “chord melody” piece.

“Thick As a Brick”
Jethro Tull | Capo 3 (acoustic guitar)
This classic Jethro Tull tune is played as if it were in D, but it “sounds” in F. It is packed with rolling arpeggios that make non-stop—and awesome—use of the capo.

We don’t like to repeat bands in our lists (OK, we’ve already done it with the Beatles and Jethro Tull), but it’s difficult to leave out this Fleetwood Mac tune. The song, which highlights a form of Travis picking, is played as if it were in the key of C. It “sounds” in Eb.

Here’s a curve ball for you—a selection from the world of bluegrass.

Second, there’s White unusual sense of timing in the first tune (“I Am a Pilgrim”); it’s as if he’s throwing in chord substitutions like a jazzer, while Roland plays it straight on mandolin. It can be a little disconcerting and confusing (but I love it). But pay close attention to the second tune (starts at 3:47), which is a traditional fiddle tune adapted to guitar. It is almost always played with a capo on the second fret, in D, although played with a C chord. For more about White, check out “White’s Lightning: Ode to the Original B-Bender, Clarence White of The Byrds and Kentucky Colonels.”

If you’d like to download recordings of White playing “Soldier’s Joy,” check out the following albums on iTunes: Long Journey Home by the Kentucky Colonels; A Potpourri of Bluegrass Jam by Muleskinner; Live in Holland 1973 by the New Kentucky Colonels; Live at Royal Albert Hall 1971 by the Byrds.