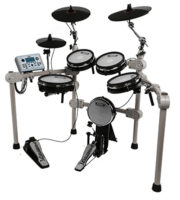 The new StingrayD5L and D10L are new versions of the D5 and D10 heads launched last year. These mirror the features of the earlier models – with the exception of USB onboard recording (though retaining the USB digital output) – but uniquely, being powered by lithium batteries that provide for up to eight hours operation on a single charge. Carlsbro says this makes them even more suitable for busking, rehearsing or practising.. Both models are supplied with mic stand mounting brackets.

General Manager Patrick Almond says, ‘This year Carlsbro is continuing to build on the incredible success in the market place of product lines that it launched or introduced new models from at last year’s show. These are representative of the brand’s expansion into the electronic instrument market, alongside its traditional guitar amplifier business, something Carlsbro has done with spectacular success. Taking on and competing with long established market leaders. With further new regional distributors coming onside and further non-traditional sales channels opening up, success is continuing apace.’

The 1975 once again delay Notes on a Conditional Form