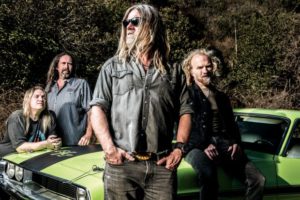 For fans of the band, that time has been a long time coming. Corrosion of Conformity began life in North Carolina more than 30 years ago, and spent their first few years building a name for themselves as one of the most ferocious units on the hardcore punk scene. And while members came and went around the core trio of Weatherman, bassist and singer Mike Dean and drummer Reed Mullin, the band had their greatest success in the early and mid Nineties when they were fronted by Keenan and were churning out sludgy, Sabbathy, southern-tinged anthems like “Albatross” and “Drowning in a Daydream.”

Following 2005’s excellent In the Arms of God, however, things went side-ways. “We made a slammin’ record, and then our label [Sanctuary] just kind of fell apart and left us hanging,” Keenan says. “I moved back to New Orleans, and then Hurricane Katrina hit and tore a bunch of shit up, and I had to get my life together down there and rebuild.”

COC went on a hiatus, and in time, Keenan began focusing primarily on his other project, the New Orleans–based, Phil Anselmo–led sludge-metal super-group, Down (when asked about the current status of that band, Keenan says that he’s “spoken with the other guys a couple of times, but everyone’s just busy at the moment”). The rest of COC, meanwhile, eventually continued on, returning to their mid-Eighties three-piece configuration. But, Keenan says, when it came to Corrosion of Conformity, “I knew the book wasn’t done yet in the grand scheme of things.” And indeed, in 2015 Keenan got together with the band and they did a short run of liv e dates in Europe. “We thought maybe we’ll go out and do three or four shows and see what happens,” Weatherman says, then laughs. “And the next thing you know, it’s two years later!”

Now, not only is Keenan firmly back in place in Corrosion of Conformity, but the band also has a new label, Nuclear Blast, and a new studio album, No Cross No Crown. From the thundering sludge-doom of “The Luddite,” to the amped-up biker metal of “Cast the First Stone,” to the heavy southern-boogie blues of “Wolf Named Crow,” No Cross No Crown in many ways picks up right where the foursome left off a dozen years ago. But there are also some curveballs scattered throughout the track list, such as a handful of short musical interludes and the title cut itself, a droning, atmospheric composition adorned with a gothic-y choir in the background. “The album goes in so many damn different directions,” Keenan says. “It stretches out there, and that’s kinda the point.”

“When we went into the studio, our thought was, The last thing we did was In the Arms of God—let’s have that in our minds as our starting point and see where it leads us,” Weatherman adds. “And it worked out good because the new album doesn’t really sound like any of our other albums, but there are elements of all of ’em kinda mixed up in there. There’s some juggernaut, thumpin’ kind of stuff, there’s a couple of rockers, there’s some of the segues we like to do. And there’s a lot of guitar candy on this record. We always have a good time doing that shit.”

Indeed, Keenan and Weatherman play plenty of guitar on the record, though they kept their setups fairly stripped down in the studio. “I just used an Orange head and an Orange cabinet, and Woody used his same old Mesa/Boogie Dual Rectifiers,” Keenan says. “And we did the entire record with one ESP each. They’re both customs, the same ones we’ve been playing since we toured with Metallica back in the day. They’re just beaten to hell. But it doesn’t really matter, you know?”

They’ll be taking those guitars back out on the road for plenty of touring with COC in 2018, first with Black Label Society and then continuing on throughout the year. “I hope the four of us keep on rollin’,” Weatherman says. “We’re having a good time and we’re loving playing all this material.”

Keenan concurs. “As long as it still means something and still has legs, we’ll keep doing it. As for how far it goes, who knows? I don’t have a crystal ball. But I think we still have a lot to say and play, so we’re just gonna keep doin’ our thing.”