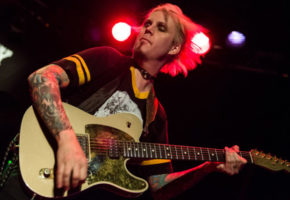 Country-Influenced Application of Hybrid Picking for Blues and Rock

In the first two installments of Chop Shop, we looked at some arpeggio-based runs that were spiced up with octaves, finger taps, pinch harmonics and behind-the-nut bends. This time, as promised, I’m going to talk about the ways in which I’ve employed ideas I’ve learned from guitarists in different genres to my own playing.

I’m going to talk about the ways in which I’ve employed ideas I’ve learned from guitarists in different genres to my own playing. To start off, I’m going to show you a lick in the key of B that I use on the track “The Nightmare Unravels,” from my album The Art of Malice.

To perform this lick, I use the technique known as hybrid picking, which involves using the bare fingers to pluck strings in conjunction with a flatpick.

The best way to describe the technique and how it sounds is through demonstration, so check out the performance of FIGURE 1 on this column’s video lesson to hear it in a rock context. Note the unique “popping” sound created by the combination of finger picking and flat picking.

Country guitar great Albert Lee is a master of this technique, and it is used to great effect in a rock context by players such as Steve Morse and Zakk Wylde. While hybrid picking can provide you with another cool way to vary your tone, it also allows you to easily perform string-skipping runs that would be arduous to play using just a pick.

Some country purists wouldn’t involve the use of a pick, just the thumb and first two fingers of the picking hand (see PHOTO 1). But since I like to incorporate this technique into my rock playing, I often use my pick in conjunction with my middle and ring fingers. As you can see in FIGURE 1, with the exception of the very last note (the B at the 19th fret on the high E string), this run is played entirely on the D and B strings. I use my pick to down-pick the D string and my middle finger (marked m above the TAB) to alternately pluck the B-string notes, making the numerous string skips a breeze to negotiate.

The open B note is sounded often, which is very useful because, as it is the root note, it clearly anchors the run to the key of B. This run may seem a little complicated at first, but when you break it down you’ll see that it’s really just a repeating seven-note fingering-and-picking pattern that is applied to different positions on the neck.

This very rhythmic pattern is isolated in FIGURE 2. All that is required to master this lick is to nail this shorter pattern, which includes a hammer-on on the D string, from the index finger to the ring, and an index-finger pull-off on the B string. The longer lick in FIGURE 1 is based on this same pattern and shaped-shifted up and down the neck to various positions. Like anything new, start off slowly and build up speed slowly, concentrating first on the fingering and picking pattern and then incorporating some palm muting, which will help keep things neat and tight sounding.

Also, start with a clean sound and introduce distortion later. Stick with it, and before you know it you’ll be playing FIGURE 1 at speed.