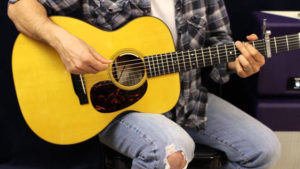 Creating Harmonies Within the Major Scale

While the relationship of chords and scales might seem fairly obvious to you, it is relevant to note that there was a time when harmony was perceived not as a series of freestanding note stocks but as the intersection of simultaneous voices, or melodies.

J.S. Bach, for example, would likely have honored your request to play a C major chord with a blank stare – even if you said it in German – but could easily improvise contrapuntal melodies adding up to the same thing. What he heard as the sum of independently moving voices, we hear as vertical bundles of notes that are independent of melodies. Scale harmony splits the difference by arranging chording melodically – one primary voice (the melody) is supported by subsidiary voices (the harmony), all built from a single scale.

Figure 1 shows a one-octave C major scale played on the second string; Figure 2 shows the same scale harmonized in triads, with the root of each chord voiced as the highest note. Keep your ring finger on the fourth string to fret all of the chords except the open C triad – this will make it easier to move quickly around the neck.

While there are seven chords in the series (identified, as is customary, by Roman numerals), there are only three different triad types, or qualities: I, IV and V are major; ii, iii, and vi are minor and vii is diminished. The order of qualities is the same in every key, making transposition relatively easy.

Figure 3 uses these chords to create a harmonized melody similar to that of “Lean on Me.’

In Figure 4, the inner voice of each chord is replaced with the open G string to create a dreamy drone reminiscent of the one in “Brokeback.” (For simplicity’s sake, the chord symbols reflect the full triads. Also, for reasons that are beyond the scope of this lesson, the C major scale harmony works even though it’s in the key of G).

You can harmonize any major scale melody the same way – it probably won’t remind anyone of Bach, but it won’t be half bad either.