Gibson is proud to unveil the first guitars in the new Dave Mustaine Collection, the Gibson Dave Mustaine Flying V EXP. For the new Flying V’s, the Gibson team collaborated with Dave Mustaine the legendary guitarist, vocalist, songwriter, and founder of the multi-platinum selling and GRAMMY® Award-winning band, Megadeth. Starting today, limited quantities of the Gibson Dave Mustaine Flying V EXP are available in Antique Natural and Silver Metallic finishes on Gibson.com and at select global dealers. A wider release of units is planned for February 2022, call the Gibson Garage to order: (615) 933-6000.
Gibson is truly honored to be working with Dave Mustaine, who formed Megadeth at the dawn of the American thrash metal movement. Mustaine has sold thirty-eight million records worldwide, earned six platinum albums, is a GRAMMY® Award winner, cancer survivor,  a certified 1st degree black belt in Ukidokan Karate, and Songahm Taekwondo, as well as an honorary 4th degree black belt and Goodwill Ambassador in the World Taekwondo Federation, and he is currently on the way to a 1st degree black belt in Gracie Barra Jiu-Jitsu. 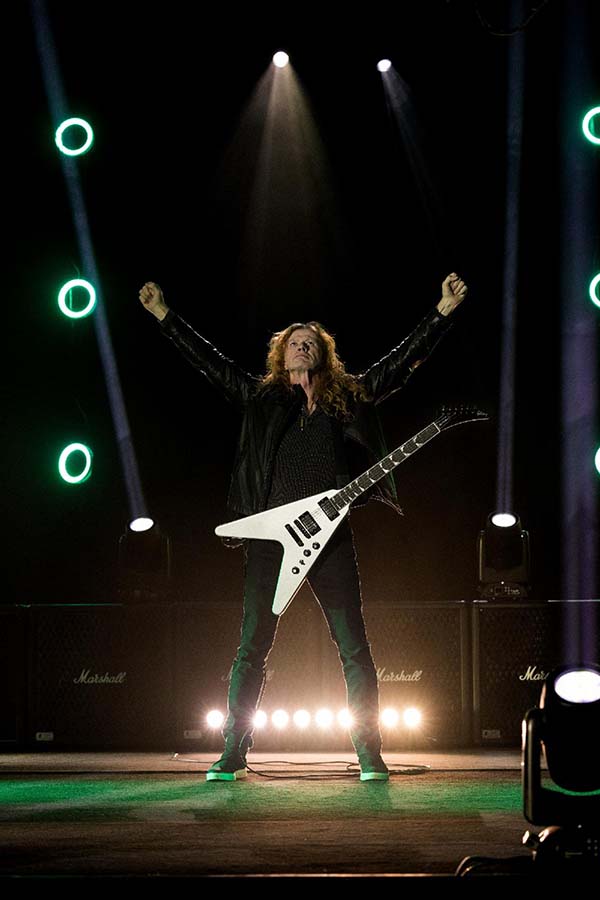 The Dave Mustaine Flying V EXP guitars are the first release in the new Dave Mustaine Collection. These guitars deliver the powerful, heavy sounds and exceptional playing performance on the stage and in the studio that Dave demands. The 25.5” scale mahogany neck has an ebony fretboard with a compound fretboard radius, 24 medium jumbo frets, mother of pearl “teeth” inlays, an Explorer-style headstock with Grover® Mini Rotomatic® tuners with Kidney buttons, and a Graph Tech® nut. The mahogany Flying V-style body is equipped with a Tune-O-Matic bridge, a Stop Bar tailpiece, and a pair of Dave Mustaine’s signature Seymour Duncan® Thrash Factor pickups. The Flying V’s are available in both an Antique Natural and a Silver Metallic nitrocellulose lacquer finish which are complemented by black chrome hardware. A hardshell case is also included.
As previously announced earlier this year, Dave Mustaine has joined Gibson as a Brand Ambassador and the Dave Mustaine Collection will span acoustic and electric guitars, as well as original content and special projects across Gibson, Epiphone, and Kramer.Dave is also a part of the Gibson Artist Alliance–a forum which includes legendary musicians, innovative movers and shakers, and new talent–to share in thought leadership, research & development, and mentorship of the next generation of players, as well as philanthropic endeavors.
Renowned worldwide and synonymous with metal guitar, Dave Mustaine founded Megadeth in 1984 and less than a year a later debuted with the release of Killing Is My Business… And Business Is Good! in 1985. Megadeth has gone on to sell more than 50 million albums worldwide, earning many accolades along the way, including a GRAMMY® Award for the title track from their most recent album Dystopia, along with 12 additional GRAMMY® nominations, as well as five consecutive platinum/multi-platinum albums. Megadeth has headlined many of the biggest stages in the world and recently played their most successful tour ever, closing every night on the North American amphitheater “Metal Tour of the Year”. Also, a New York Times bestselling author and sought-after speaker, host, and commentator, Mustaine has remained a standard bearer for metal and heavy guitar rock, combining a musical and technical standard with the punk and rock n’ roll ethos and attitude. As vital and pace–setting as ever, Megadeth’s last album Dystopia matched the highest chart positions ever achieved by the band. Megadeth is currently working on their 16th studio album. Listen to Megadeth, HERE.

Chibson’s absurd four-foot whammy bar is real, and you'll be surprised just how good it is

Eric Clapton, George Harrison and the Beatles: a guide to nearly 50 years' worth of studio collaborations

Rufus Philpot: “The first time I heard Level 42's The Chinese Way on the radio, I couldn’t believe someone could play bass that fast...