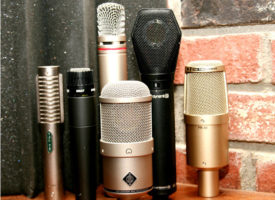 So far we’ve looked at some basic gear: guitars, computers, amps and modelers. This week we get personal: microphones and proper and improper use!

Basically, microphones are like ears. They HEAR the sound. There are various types of microphones, and they are meant to have specific uses. However, this being the good old USA, we can do whatever the heck we want!

Technical information over. It’s time to see how we can use these guys to best capture the guitar!

Starting as simply as possible, we will rely on our old friend, the SM57. This mic can handle high volume, meaning LOUD amps. Or quiet ones too. Where you place the mic is what we need to see. Placing the mic on the outside edge of the speaker will give a darker sound (Photo 1 in the photo gallery below).

Placing it centered on the speaker will give a brighter sound (Photo 2 in the photo gallery below). One is not better than the other, just different. Use your ears. A great idea might be to double a rhythm track and move the mic for each track, pan one left and right and each guitar will have a subtle identity shift.

Now how about distance? The old maxim is, distance equals depth. It’s basic physics and it is true. Want to add some depth to your track, back that mic up from the speaker 6 inches to 12 feet! Use your ears! For solos especially, this is important.

Our brains are sensitive enough to hear these changes in distance. It places the guitar in a different environment. By the way, all these techniques can be used on anything you are micing. Want backing vocals to lay better in the track? Back the singers up by a foot. Tambourines and shakers too. John Bonham from Led Zeppelin was often mic’ed from down a hallway with one mic.

How about acoustic guitar? A basic starting point is aiming the mic at about the 12th fret and maybe 6 inches away (Photo 3 in the photo gallery below). However, every guitar is different, so use your ears! Move the mic closer to the hole and the sound becomes bassier or boomier. Aim it at the fretboard and it becomes thinner.

I have a very decent collection of mics (Photo 4 in the photo gallery below). However, if you don’t, do not let that stop you from making music and trying anything crazy to capture your own sound!

I wish I had more room, but feel free to ask any questions or tell me about some of your late night techniques!

Ron Zabrocki on Ron Zabrocki:I’m a session guitarist from New York, now living in Connecticut. I started playing at age 6, sight reading right off the bat. That’s how I was taught, so I just believed everyone started that way! I could pretty much sight read anything within a few years, and that aided me in becoming a session guy later in life. I took lessons from anyone I could and was fortunate enough to have some wonderful instructors, including John Scofield, Joe Pass and Alan DeMausse. I’ve played many jingle sessions, and even now I not only play them but have written a few. I’ve “ghosted” for a few people that shall remain nameless, but they get the credit and I got the money! I’ve played sessions in every style, from pop to jazz.

View the 4 images of this gallery on the original article