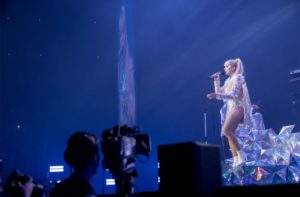 ‘I have a comedy amount of Waves plugins on here,’ said FOH engineer Andy Williamson

Touring her latest album The Architect, the show’s channel count out front is at 75, which is broken down into drums and electronics, 20 lines of keys, guitars, vocals, and various drum triggers.

Paloma’s FOH engineer, Andy Williamson, said: “I could have done this show on an SD5, but we’re using that on monitors [with James Neale], so I’m on the SD7; and I have to say, this show really is an exercise in chopping.

“There is that much going on, it had to be a Digico to make it work – and I have a comedy amount of Waves plugins on here, too. I have to use dynamic compression across the whole thing, and all the tracks are cut to hell; it’s a bit of a noisy jigsaw, really, but it works well, and these consoles are always great sounding and super-reliable.”

Andy admits that one of the biggest challenges in making this huge show work is getting all the strings to sit on top of the mix; thankfully, having the SD7 at hand makes it that bit easier, he said.

“That’s definitely the tough thing to do on this show, but Paloma has a thing about Phil Spector’s production – that Wall of Sound – and we’ve been able to give her that using this console,” Andy explained. “She has such a phenomenal voice, too – totally unique, and instantly recognisable – but she does have a lot of high mid in her voice, so we also added a linear head [to her microphone] to take away that presence, and that has made a big difference all round.”

Paloma’s UK tour will continue into early September; and in November, she will head down under for a series of shows in New Zealand and Australia as special guest to four-time Grammy-winner (and fellow Digico-using artist) Sam Smith.