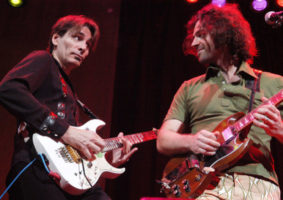 Below, check out a particularly tasty (guitar-wise) scene from the 2008 Zappa Plays Zappa DVD (which, I might add, comes highly recommended).

The clip kicks off just as Dweezil Zappa and Steve Vai are about to launch into a blistering guitar duel on Frank Zappa’s “Trouble Every Day” (which was revamped by Frank and his band as “More Trouble Every Day” in the early Nineties).

On this particular tune, the Dweezil Zappa-fronted Zappa Plays Zappa band was joined by Steve Vai. Vai, of course, was a member of Frank Zappa’s band in the early Eighties.

The Zappa Plays Zappa band, which debuted in 2006 with shows in Europe, Canada and the U.S., played a collection of Frank Zappa’s rock-oriented compositions from the Sixties through the Eighties. Apart from Dweezil on lead guitar, the band consisted of a mix of relatively unknown young musicians and older musicians who had played with Frank. Napoleon Murphy Brock (sax, flute, vocals) was an integral part of the band, while drummer/singer Terry Bozzio and Vai performed as guests.

Frank Zappa’s “Trouble Every Day” originally appeared on the Mothers of Invention’s 1966 debut album, Freak Out!