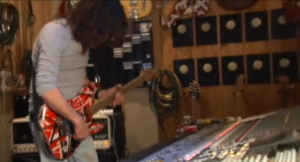 Eddie Van Halen reportedly filed a civil injunction Friday, January 26, to halt the release and sale of footage that was taken by filmmaker Andrew Bennett at his 5150 Studios in 2006.

According to court documents obtained by TMZ, the guitarist is suing Bennett for copyright infringement, as Bennett is attempting to sell the footage, which Van Halen was unhappy with.

According to Bennett, the footage contains clips of Eddie, Wolfgang and Alex Van Halen—without a singer—in the studio, performing a 19 song set. None of the footage, Bennett says, has ever been released.

In a note on the website he created for the documentary, Bennett claims that he was never paid for his work, but maintains that he did not attempt to release the footage out of “respect” for Eddie Van Halen and the band.

According to court documents, Van Halen reached a financial settlement with Bennett in 2015, which involved Bennett handing over all the footage to the band. The hard drive Bennett sent the band, according to the documents, was inoperable.

You can watch the trailer below, and judge the footage for yourself.

Bennett is selling copies of the 5150 Vault on the documentary’s website for $500 each.

Guitar Gabby: "Understanding where guitar music came from helps young black women like me, out here paving our own paths"