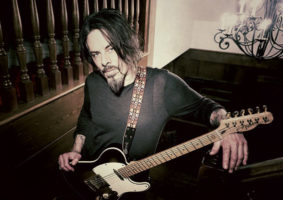 What initially inspired you to pick up a guitar? I was one of those kids that loved to sing and dance and try and entertain my family. I have a picture of me from when I was four or five, dressed in some kind of crazy costume with a plastic guitar and mic stand and singing—lip-synching—for my family. And then someone suggested that I should take piano lessons. So I had a few lessons and then I just didn’t really take to it very well.

And then a few years later, I was at a garage sale and there was a guitar there, and I realized that’s what I wanted to play. Around the same time, I became a fan of the band Kiss. So I kinda put it all together that those guys dressed up really cool, played really loud music and they were holding guitars. So I figured that must be the instrument I should be playing.

What was the first guitar that you owned? My first real guitar was a Gibson Marauder. I was a seven-year-old kid and I wasn’t working, so my parents bought it for me. Maybe five years later, once they realized I was really serious about the guitar, they bought me, for Christmas, a Yamaha SBG2000. That became my main guitar for a long time.

What was the first song you learned? “Jingle Bell Rock,” because I had to perform it at a school function. I think I was in sixth grade. Then shortly around the same time, I learned “Purple Haze.”

What do you recall about your first time playing live? It was at that school recital. I remember being very upset because I couldn’t tune the guitar. And finally there was another kid there that was much older who was in the school jazz band. He tuned it for me and I went out and played.

Have you ever had an embarrassing moment onstage, or a nightmare gig? I can remember being booked in some really awkward places. Most of them have been on European tours. One in particular, I remember playing in what felt like somebody’s basement. It was always crowded and it felt like a fire trap. Those kinds of gigs can be really nerve-wracking, ’cause you can’t really see anything, it’s hard to hear and there’s a lot of people. I’ve been in some dangerous situations with gigs in the past, but I think that’s all part of paying your dues.

Is there a particular moment on your most recent album, Salting Earth (Headroom-Inc), that you’re particularly proud of? I think my favorite track on the record is “This Is Life.” I really love the way that turned out. The song was initially written and recorded on the drums. I know that sounds insane, but I heard something in my head. So I went into the studio, sat behind the drums with no click track, and played as if I was playing with a band. Then I put down a guitar track, and then I added the bass. And that’s what you’re hearing: the original tracks. Later on, I came up with lyrics. And then I added the piano and, of course, the guitar solo at the end. So any song can be written in any way, but that one in particular, just because of the way I recorded it, I just think it’s so unique.

What is your favorite guitar or piece of gear? My favorite piece of gear is the RK5 Fly Rig. This was a pedal I put together where I took my favorite overdrive and my favorite delay and the controls from my Fender amp, and I mounted it into one little pedal. Because, before the Winery Dogs, I was doing a lot of fly dates, where I would fly down to South America for three weeks, do a bunch of shows, come home. Then I’d fly to Europe for a month, do a bunch of shows, come home. So I needed a small rig. So I showed it to the fellows over at Tech 21 and we found a way to improve it and put it into a more professional enclosure. And now it’s available to everyone.

Along with that, my favorite guitar is a Fender Telecaster; I have a signature model that’s been sold since 1996. It’s a Fender Tele that’s based off of a Custom Shop model they gave me back in 1991.

Do you have any advice for young players? Follow your heart and learn the music you love. And once you have a handle on the instrument, the ultimate thing is to create and write your own music. That’s a fantastic thing, to have an idea and bring it to fruition. And the great thing about playing any instrument, and the thing that I love, right up there equal to writing, is just improvising. Just follow the creative flow.

The Nautilus Returns for 2020

Paul Stanley plays Kiss Klassics from home during self-quarantine: "It's me and you hanging out"

Sammy Hagar: “I always got blamed for the keyboard songs in Van Halen. It was not me – Eddie wanted to do that!”

Sick Riffs: Tom Hunter teaches you the pentatonic licks behind The Jacks' Threw It All Away