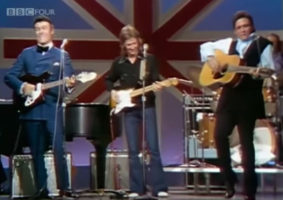 Who doesn’t have time for a quick, harmless blast from the past?

Who doesn’t have time for a quick, harmless blast from the past?

Below, check out two pro-shot videos of Eric Clapton and Carl Perkins performing “Matchbox,” which Perkins originally recorded in 1956 and released in 1957.

The top clip is from a well-known November 1970 episode of The Johnny Cash Show during which Clapton’s then-band, Derek and the Dominos (minus Duane Allman), is joined by Cash and Perkins for a rousing cover of the tune.

Below that, you’ll find an October 1985 performance of “Matchbox” that features Perkins, Clapton and former Beatle Ringo Starr, who sang lead vocals on the Beatles’ version. It was filmed in London as part of Blue Suede Shoes: A Rockabilly Session, which also featured (and features, since it’s available as a DVD) George Harrison.

In the ’85 version, Clapton truly goes to town, delivering a blazing solo with a throaty, scooped Strat tone, not to mention some strong vocals.

While Perkins’ “Matchbox” has been recorded several times, it’s safe to say the Beatles’ 1964 version is probably the best-known rendition—and the reason many of us are able to play and sing along with the tune today.