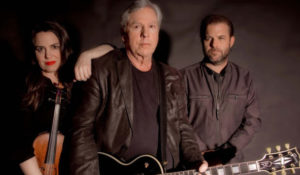 James Williamson—former guitarist for Iggy & the Stooges and author of the iconic riffs that powered “Search and Destroy” and “Your Pretty Face Is Going to Hell”—is back with a new band, the Pink Hearts, and a new solo album, Behind the Shade.

Fronted by vocalists Frank Meyer and Petra Haden (That Dog, the Haden Triplets), the Pink Hearts’ repertoire encompasses everything from feral rockers to soul-searching ballads. Their debut album, Behind the Shade, is set for a June 22 release via Leopard Lady Records.

“My lyric capability is very poor,” Williamson told Rolling Stone. “I had to really recognize that it’s just never going to come for me. So I teamed up with Frank, and I would sit down and write a riff—which was essentially the same style I’ve always used my entire career. We did the same thing with Iggy [Pop] and I’d come up with a riff, and then he’d put some lyrics behind it.”

The origin of the Pink Hearts stretches back to 2012, when Williamson was searching for backing singers to appear on what would become the final Stooges album, Ready to Die. Former Minutemen/fIREHOSE and then-Stooges bassist Mike Watt suggested his friend, Haden. “Petra came in with her violin and blew me away with her playing and singing,” Williamson said in a press release. “Months later when we recorded the basic tracks, I included her on what would become Ready to Die’s closing track, ‘The Departed’.”

Meyer’s route toward the Pink Hearts was a bit more circuitous. “The last full-length album I released was [2014’s] Re-Licked,” Williamson said. “It was a proper recording of songs Iggy and I had demoed for the followup to Raw Power. The album featured 14 different vocalists so it was pretty impossible to tour, although I did appear on Last Call with Carson Daly alongside several singers who appeared on the album.”

“When I eventually booked a handful of West Coast concerts to support the album, I was lacking a male vocalist for ‘I’m Sick of You,’ so I asked my friend Cheetah Chrome (the Dead Boys) for suggestions. He recommended Frank Meyer, singer/guitarist with the Streetwalkin’ Cheetahs, which happened to be Cheetah’s touring band at the time. Frank killed it on the live show. I was very impressed by his singing and stage presence.”

You can preorder Behind the Shade right here and check out a preview of the album’s lead single, “Riot on the Strip,” above.

Behind the Shade tracklist: